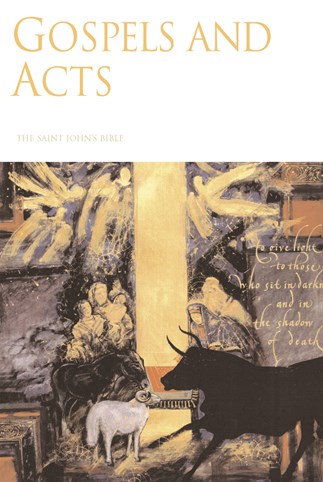 The first of seven full-color, page-by-page reproductions from The Saint John's Bible, Gospels and Acts has more than 25 illuminations, including full-page opening illuminations for each of the four gospels. Some of the prominent illuminations include the Genealogy of Jesus, the Birth of Christ, the Raising of Lazarus, the Crucifixion, Christ Our Light, the Last Supper, the Road to Emmaus, and Pentecost.

The Word of God, hand-illuminated through ancient methods by a contemporary master, brings the reader to an epiphany of the sacred. Those who allow themselves to savor the experience unfolding before them will come to see how Gospels and Acts beautifully marries text and image to serve the Word.

An internationally respected calligrapher, Donald Jackson is the artistic director and illuminator of The Saint John’s Bible. He is a Senior Scribe to Her Majesty Queen Elizabeth’s Crown Office at the House of Lords in the United Kingdom, a position in which he is responsible for the creation of official state documents. He is an elected Fellow and past Chairman of the prestigious Society of Scribes and Illuminators. His 30-year retrospective exhibition, Painting with Words, premiered at The Minneapolis Institute of Arts in Minneapolis, Minnesota in August, 1988 and traveled to 13 museums and galleries. Donald Jackson works with a team of theologians and artists from Saint John’s University and Abbey on The Saint John’s Bible. From his scriptorium in Wales, he oversees scribes, artists, and craftsmen who work with him on the handwriting and illumination of the seven-volume, 1,150-page Bible.

This volume is an extraordinary literary and artistic accomplishment.
The Bible Today

The Saint John's Bible is intended to assist Jews, Muslims, and Christians in seeing shared commonality in the Bible. . . . In a time when people have so much to learn about different faiths, it is refreshing still to believe that experiencing the material and iconic aspects of the Bible can assist this understanding.
Catholic Biblical Quarterly

Hands down the most exciting of the books presented this year. The Gospels and Acts of the Apostles are presented in a way that literally illuminates each page with the inherent dignity and grace of the scripture. This book is not only ornate in a way the average Bible couldn't. It is worth the price and will be cherished forever in a persona library or a house of worship.
The Catholic Press Association

The St. John's Bible is unquestionably art. And in the practice of Jackson and his team members, so is calligraphy.
Journal Star Lincoln, Nebraska

The experience of studying The Saint John's Bible has caused me to consider what happens to us when we welcome sacred words into our hearts.
Real Live Preacher

Holding Gospels and Acts in one's hands invites a spirit of reverence and wonder!
Prairie Messenger

An impressive achievement.
The Catholic Answer

Psalms and Prophets are both commended for your coffee table or library.
Liturgy, Hymnody, & Pulpit

As with the other volumes of this extraordinary set, this book is an artistic treasure. Both the calligraphers and the illustrators have produced a work beyond compare.
Catholic Library World