A Portrait of This Place Called Collegeville 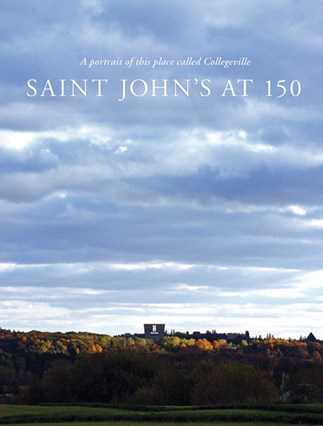 As Saint John’s celebrates its 150th anniversary the story of this spiritual community is told in captivating words and telling images in Saint John's at 150. The 160-page book features compelling essays by a variety of writers and striking black-and-white and color photos. All who know Saint John’s and Collegeville will find that the words and images ring true in this lively book about such a remarkable place.

Launched to coincide with the celebration of Saint John’s Sesquicentennial, Saint John's at 150 includes a glimpse of life in Minnesota and the nation as background for the Saint John’s story. Personal essays about Saint John’s first 150 years are provided by writers from Saint John’s monastery, the university faculty, and friends around the world. They focus on such intriguing topics as the missionary lifestyle of the first monks to cameo images of college professors.

More than 30 authors contribute sidebars and special features on a variety of subjects: Katherine Powers remembers her father, J. F. Powers; Bill Kling reminisces on the founding of Minnesota Public Radio; author Jon Hassler recalls his college days and his professor, Steve Humphrey; Thomas Merton reflects on the beauty of a summer afternoon and the chapel across the lake. This volume, edited by Hilary Thimmesh, O.S.B., professor of English and president emeritus at Saint John’s University, also includes numerous photographs of campus life in the monastery and the university, as well as images taken by Peter Engel, O.S.B., before he became abbot in 1895.

Though not a comprehensive history, Saint John's at 150 references the surprising number of people, places, and events that comprise this exceptional place called Collegeville.

The book includes Foreword, by Abbot John Klassen, O.S.B.; Introduction: Outside the Pine Curtain for 150 Years, by Annette Atkins; Chapter 1: A Time to Plant and a Time to Grow by Hilary Thimmesh, O.S.B.; Chapter 2: A Little Rule for Beginners, by Columba Stewart, O.S.B.; Chapter 3: 'A Scientific, Educational, and Ecclesiastical Institution’ by Joseph Farry; Chapter 4: 'Proudly Stands Our Alma Mater, Tow’ring o’er the Oak and Pine,’ by Larry Haeg; Chapter 5: Plowing the Fields, Scattering Good Seed upon the Earth, by Hilary Thimmesh, O.S.B.; Chapter 6: Saint John’s and the Liturgical Movement: A Personal View, by William Franklin; Chapter 7: Virgil Michel and the Collegeville Community: Liturgy and Social Justice, by Bernard Evans; Chapter 8: Nursery of the Arts, by Robin Pierzina, O.S.B.; Chapter 9: Going Forth to Work till Evening Falls, by Annette Atkins, Norma Loso Koetter, Zach Lewis; Chapter 10: Two Benedictine Communities Seeking God Together, by Jana and Charles Preble; Chapter 11: The Design and Construction of Saint John’s Abbey Church, by Victoria Young; Chapter 12: For Beauty as Well as Bread: Saint John’s and the Land, by Derek Larson; Afterword, by Dietrich Reinhart, O.S.B.; and Poems, 'My Funeral,’ by Kilian McDonnell, O.S.B., 'The Mind Is the Great Poem of Winter,’ by Eva Hooker, C.S.C., and 'Crew (Saint John’s),’ by Carl Phillips.

Hilary Thimmesh, OSB, is a professor of English and president emeritus at Saint John’s University in Collegeville, Minnesota.

The excellence of the leadership of St. John's Abbey of Collegeville, Minn., is beautifully portrayed in the fine quality of the content and layout of this commemorative volume marking the sesquicentennial of Saint John's Abbey and its monastic and lay community.
Prairie Messenger

This lovely volume contains a dozen thoughtful essays and dozens more quotes and quips that even without illustrations would comprise a solid survey of St. John's University in Minnesota. As it is, the book's spectacular photography, both contemporary and archival, adds depth and richness to the prose.
Catholic Library World

Composed of essays by monks, staff, and friends on various features of the abbey's long past, this beautifully printed volume, often matching black and white historic photos of yesteryear with the same scene today in full color. Readers who enjoy The Bible Today can thank this extraordinary Benedictine community in Minnesota for making it all possible!
The Bible Today

This collection of essays, poems, sidebars, and many photographs-both black-and-white and color-presents a century and a half of Benedictine life and education in central Minnesota.
Minnesota History