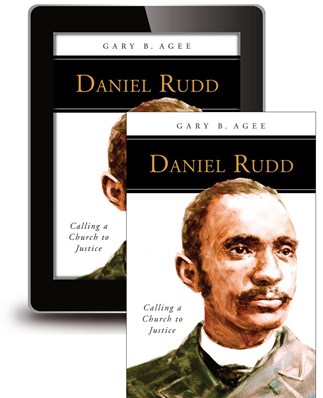 Calling a Church to Justice
Gary B. Agee

In May of 1890, the Christian Soldier, an African American newspaper, identified the Catholic journalist and activist Daniel Arthur Rudd as the "greatest negro Catholic in America." Yet many Catholics today are unaware of Rudd's efforts to bring about positive social change during the early decades of the Jim Crow era. In Daniel Rudd: Calling a Church to Justice, Gary Agee offers a compelling look at the life and work of this visionary who found inspiration in his Catholic faith to fight for the principles of liberty and justice. Born into slavery, Rudd achieved success early on as the publisher of the American Catholic Tribune, one of the most successful black newspapers of its era, and as the founder of the National Black Catholic Congress.

Even as Rudd urged his fellow black Catholics to maintain their spiritual home within the fold of the Catholic Church, he called on that same church to live up to what he believed to be her cardinal teaching, "the Fatherhood of God and Brotherhood of Man." Rudd's hopeful spirit lives on today in the important work of the National Black Catholic Congress, as it carries forward his pursuit of social justice.

Gary B. Agee teaches church history for the School of Theology and Christian Ministry at Anderson University, Indiana. Agee has been a pastor in the Church of God (Anderson) since 1985. He is currently the lead pastor of the Beachwood Church of God (Camden, Ohio). Agee is the author of numerous books including A Cry for Justice: Daniel Rudd and His Life in Black Catholicism, Journalism, and Activism, 1854-1933 (2011).

This informed and informative account of Daniel Rudd and his mission is particularly and especially recommended reading for all Catholics.
The Midwest Book Review


Black Catholicism is personified in the life and legacy of Daniel Rudd. Gary Agee masterfully chronicles the successes and struggles, the opportunities and obstacles that Rudd encountered as he made his mark on both the Church and society as newspaper publisher, founder of the Black Catholic Congress movement and advocate for racial justice. Present-day Black Catholics are forever indebted to the nascent visionary actions of Daniel Rudd.
Rev. Maurice J. Nutt, CSsR, DMin, Director, Institute for Black Catholic Studies, Xavier University of Louisiana


Dr. Gary Agee, exposes Daniel Rudd's profound and inseparable commitment to the Catholic Church and his earnest pursuit of justice. Propelled by what he deemed `the cardinal doctrine of the faith,' Rudd used every opportunity available to promote `the Fatherhood of God and Brotherhood of Man.' Despite difficult circumstances as an African American man living in post-Reconstruction America, or perhaps because of his life experiences and observations, Rudd's compassion transgressed boundaries of self-concern, extending `heart and hand' to immigrants, women, the European Catholic minority in the U.S. and those struggling for justice beyond U.S. borders. This book surely will inspire those curious about the historical and contemporary influence of African American Catholics.
Donna Toliver Grimes, USCCB Secretariat of Cultural Diversity in the Church Assistant Director of African American Affairs


Daniel Rudd: Calling a Church to Justice is an engaging introduction for those who have never heard of Daniel Rudd and a fascinating study for those who already know a good deal about the man and his mission. Using Daniel Rudd's newspaper, The American Catholic Tribune, as his primary source, Gary Agee allows readers to hear in Rudd's own words why he was committed both to the Catholic Church and the African American community, and learn how Rudd came to his absolute conviction that Catholicism truly lived, understood, and applied was the best chance for justice for people of African descent in the United States. Daniel Rudd is one of the most intriguing and inspiring U.S. Catholics of the 19th century. Agee's book helps us to see why this is so.
Cecilia A. Moore, University of Dayton