Homilies in Praise of Blessed Mary 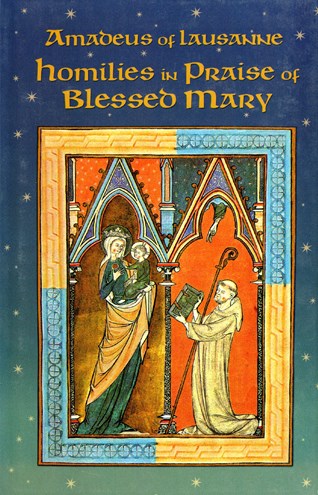 Educated at the abbeys of Bonnevaux and Cluny and at the court of his kinsman, Conrad of Hohenstaufen, Amadeus became a monk of Clairvaux in 1125, just about the time its abbot, Bernard, began to be noticed by the Church at large. After twenty years in the cloister, Amadeus became bishop of the troubled diocese of Lausanne. Reform and renewal did not come easily. In one of his letters he tells how his vestments once ran red with the blood of a man murdered while the bishop tried unsuccessfully to protect him.

Amid political skullduggery, as well as the demands of pastoral and administrative duties, Bishop Amadeus managed to write 'perhaps to preach 'these eight homilies in praise of Mary. In them he expresses not only the monastic devotion he had learned in the Order which dedicated 'and still dedicates 'each of its churches in her honor, but also the more popular devotion which was sweeping western Europe in the mid-twelfth century.

Formed as a monk under the charismatic influence of Saint Bernard, Amadeus retained a distinctive piety which finds eloquent expression in this series of sermons, almost all that survives from his pen.