Isaac of Stella, Translated by Lewis White with introduction by Elias Dietz, OCSO 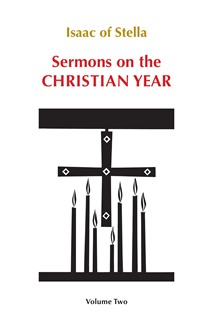 Isaac of Stella was an English-born Cistercian who studied in the schools before entering monastic life and becoming abbot of Stella in 1147. His liturgical sermons inject a speculative philosophical inquisitiveness into imaginative meditations on scenes from Scripture. This present volume includes sermons 27-55, along with three fragments. In these sermons, while treating biblical passages corresponding to the major feasts of the Christian calendar, Isaac tackles weighty dogmatic issues such as predestination, the problem of evil, and Christ's two natures.

Lewis White has been a professor and translator at the Language Center of the Universidad Tecnológica de la Mixteca, Huajuapan de León, Oaxaca, Mexico, since 2009. His translations of Aelred of Rievaulx's Homilies on the Prophetic Burdens of Isaiah (CF 83) and of some of the liturgical sermons from Aelred's Durham Collection (CF 80) were published by Cistercian Publications in 2018.

Elias Dietz has been a monk of the Abbey of Gethsemani since 1988. He has published studies on early Cistercian authors in various journals, including Cistercian Studies Quarterly, of which he was editor from 2003 to 2007. Since 2008 he has served as abbot of his community. With regard to Isaac of Stella, his main contributions have been a study of his biography (CSQ, 2006) and an edition and translation of his Letter on the Canon of the Mass (Cîteaux, 2014). He is currently collaborating with Sources Chrétiennes on a volume of Isaac's letters.

"This long-awaited volume allows contemporary readers to appreciate the full theological creativity and monastic wisdom of one of the greatest, but less well-known, Cistercian mystics of the twelfth century. Isaac of Stella's liturgical sermons are original, challenging, and spiritually nourishing. It is a delight to have them in a fine English translation for the first time."
Bernard McGinn, Naomi Shenstone Donnelley Professor Emeritus, Divinity School, University of Chicago

"Isaac’s sermons exist in only a few manuscripts, and hence few have had an opportunity to read his Latin text. This translation makes the sermons accessible to anyone who can read English. We should be grateful to all who made that possible."
Cistercian Studies Quarterly

"This new publication, which brings to completion the whole series of his sermons, coming out forty years after the first half, benefits from two improving new factors: a better knowledge of Isaac's life and literary output, and an updated translational technique, more attentive to the original style of the author. Such a work will undoubtedly increase the knowledge and the consequent relevance of Isaac of Stella, for `the soundness of his monastic teaching, the depth and breadth of his theology, and his skill with words'. Surely, it is time for acknowledging his high place among the great authors of the first Cistercian generation, and his full and undisputable right to be called `the fifth evangelist of Cîteaux.'"
Fr. Domenico Pezzini