The Great Beginning of Citeaux

A Narrative of the Beginning of the Cistercian Order 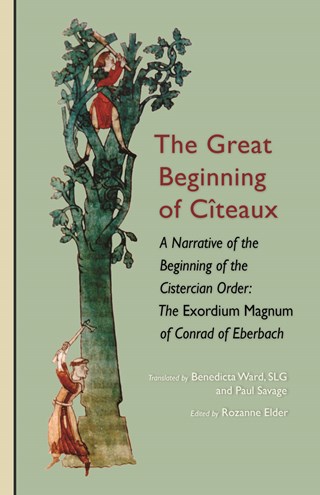 In the closing decades of the twelfth century, the Cistercian Order had become an important ecclesiastical and economic power in Europe. Yet it had lost its influential spokesman, Bernard of Clairvaux, and as the century drew to a close, religious sensibilities were changing. The new mendicant orders, the Franciscans and the Dominicans, and the impulses they embodied were to shift the center of gravity in Christian religious life for centuries to come.

It was in this transitional period that Conrad of Eberbach gradually—between the 1180s and 1215—compiled the Exordium magnum cisterciense: The Great Beginning of Cîteaux. It is a book of history and lore, often with miraculous stories, meant to continue a great spiritual tradition, and it is also a book meant to justify and repair the Order. The Exordium magnum was in part an effort to provide a historical and formative context for those who were to be Cistercians in the thirteenth century.

Conrad's combination of a historical sensibility and the edifying exempla makes the Exordium magnum a remarkably innovative book. Its unique combination of genres—narratio and exempla—is conceivable only within the intellectual world of the twelfth or early thirteenth centuries, before exempla collections came to be complied solely for edification or use in sermons. The Great Beginning of Cîteaux is a revealing book and an excellent place to begin more detailed study of the Cistercian Order between 1174 and the middle of the thirteenth century.

Here we have an accessible English version which gives a well-defined picture of life in Cistercian monasteries, from the foundation of the Order until the early thirteenth century. . . . Although at first sight this book appears to be one for scholars or members of the Cistercian Order, I discovered that it has a wider appeal. In scholarly terms Conrad's is not a critical history, but stands nearer the tradition of the Desert monastics, relating stories that are designed to build up the reader in faith. However, the serious student will find the extensive footnotes and bibliography particularly useful.
Sister Christine SLG, Fairacres Chronicle

The Great Beginning of C�teaux is a rich treasure trove of stories, visions, and miracles that should be a mandatory reading for all those interested in twelfth- and thirteenth-century spirituality, history, and culture. The translation is superb, and the introduction very helpful for general readers and scholars alike.
Stefano Mula, PhD, Director, Comparative Literature Program, Middlebury College, Middlebury, VT

Benedicta Ward and Paul Savage have done a great service in making this important text easily accessible to students, scholars, and all those interested in the Cistercians and their stories. They offer a lucid translation of Conrad of Eberbach's difficult prose and provide extensive commentary that places Conrad's work in its monastic context.
Martha G. Newman, PhD, Associate Professor of History and Religious Studies, The University of Texas at Austin, Author of The Boundaries of Charity: Cistercian Culture and Ecclesiastical Reform, 1098-1180

Sister Benedicta Ward and Paul Savage must be congratulated for their important and successful translation of one of the most significant works of the Cistercian Middle Ages, which is now finally made available to non-specialists. Reading the Great Beginning of Citeaux, in fact, will not only appeal to those interested in the history of the Cistercian Order. In this collection of stories readers will find a wealth of information on medieval spirituality, history and culture, and it is a work that could be of benefit in any course on the Middle Ages.
Stefano Mula, Middlebury College, Horizons