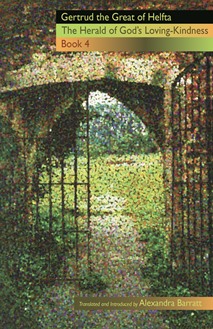 The Herald of God's Loving-Kindness: Book 4

Books 1, 3, 4, and 5 were written down by another nun, a close confidant of the saint, now often known as "Sister N." Book 4 records Gertrud's many vivid spiritual experiences, which took place on various liturgical feasts when she was too sick to take part in the community's worship. Foregrounding visions of the court of heaven and dialogues with Christ, the Virgin Mary, and other saints, they further develop devotional themes already present in the earlier books. Often profoundly indebted to the liturgy of Mass and office, they have been carefully arranged according to the ecclesiastical year by the medieval compiler.

Alexandra Barratt is professor emeritus at the University of Waikato in New Zealand. She studied at the Universities of Cambridge and Toronto and has published extensively on religious writing by medieval women in Latin and English. She has previously translated Books One and Two (CF035) and Book Three (CF063) of The Herald for the Cistercian Fathers series.

"Renowned scholar of the Helfta literature, Alexandra Barratt, has produced her translation of the next portion of the Herald in the same careful and well-researched manner as her previous volumes. It is particularly important that this book is appearing in light of the drive for the declaration of Getrud as a Church Doctor. Barratt's translations have done much to keep the scholarship moving."
Judith Sutera, OSB, Magistra


"Having now translated the first four books of Herald of God's Loving Kindness, Alexandra Barratt has made an invaluable contribution to studies on Gertrud the Great and the women religious at Helfta. Barratt's introduction and notes helpfully elucidate the role of liturgy and music especially central in this book of the Herald. Her translation achieves the delicate balance between being faithful to the singular charisma of Gertrud of Helfta and being accessible to the contemporary reader."
Ella Johnson, Assistant Professor of Systematic Theology, St. Bernard's School of Theology and Ministry


"Gertrud the Great of Helfta's Legatus divinae pietatis was translated into different European vernaculars from the late Middle Ages onwards, and has been influential ever since. Alexandra Barratt's lucid and eloquent translation into modern day English reopens its reception to a general readership, and gives a comprehensive introduction to the historical background and the text's style. This commendable piece of scholarship provides a crucial base for the study of visionary hagiography in medieval Europe."
Racha Kirakosian, Assistant Professor of German and the Study of Religion, Harvard University