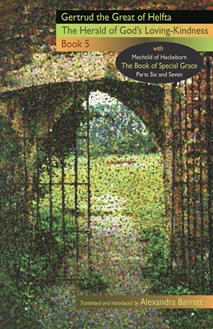 
The Book of Special Grace, Parts Six and Seven by Mechtild of Hackeborn
Gertrud the Great of Helfta; Translated, with an introduction and notes, by Alexandra Barratt

“With this book, Alexandra Barratt completes her translation of all five parts of Herald of God’s Loving-Kindness and therefore significantly contributes to Gertrudian studies. Her inclusion of parts six and seven of The Book of Special Grace, associated with Mecthild of Hackeborn, provides an invaluable tool for continuing scholarship on the thirteenth-century Helfta community."
Ella Johnson, author of This is My Body: Eucharistic Theology and Anthropology in the Writings of Gertrude the Great of Helfta


"The importance of Helfta monastery in medieval religious culture is well established, as is the role of Gertrud the Great. Barratt's translation of Gertrud's Herald, which makes this profoundly significant text accessible in a polished and reliable rendition, is now complete with the publication of Book 5, along with related material from Mechtild of Hackeborn. Book 5 deals with the terminal illnesses, deaths, and afterlives of nuns and others connected with Helfta, and it shows how posthumous purgation and the intercession of the living were viewed in a late medieval setting. As Barratt points out, this final book also gives rich depiction of the monastic community. This book is the capstone to a project of the utmost significance for the study of medieval religious culture."
Richard Kieckhefer, Northwestern University