The Reading-Cluny Collection, 2 of 2; Sermons 134–182; and A Sermon Upon the Translation of Saint Edward, Confessor

Aelred of Rievaulx; Translated by Daniel Griggs and Tom Licence, with an introduction by Marjory Lange 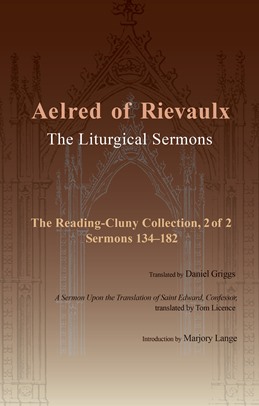 Aelred (1110–1167) served Rievaulx Abbey, the second Cistercian monastery in England, for twenty years as abbot. During his abbacy he wrote thirteen treatises, some offering spiritual guidance and others seeking to advise King Henry II. He also wrote thirty-one sermons as a commentary on Isaiah 13–16 and 182 surviving liturgical sermons, mostly addressed to his monks.

This volume contains the second half of Aelred's ninety-eight liturgical sermons from the Reading-Cluny collection, Sermons 134 through 182, as well as Aelred's sermon for the translation of Saint Edward the Confessor in 1163, from the critical edition by Peter Jackson first published in Cistercian Studies Quarterly. For the most part, the collection follows the liturgical year; this volume begins with a sermon for the birth of John the Baptist and ends with three sermons for the feast of All Saints. It contains sixteen Marian sermons as well as a sermon for the birth of Saint Katherine and a sermon for nuns.

Daniel Griggs earned an MA in medieval studies and a PhD in Byzantine theology, both from the University of Leeds. He teaches Latin at Butte College near Chico, California, and translates medieval texts from Greek and Latin. He previously translated Saint Bernard’s Sermones de Diversis, published in CF 68 as Monastic Sermons.

Marjory Lange has been a professor of English/humanities at Western Oregon University for twenty-three years. She is also an accomplished violist and violinist who regularly performs in Oregon and southern Washington. After publishing Telling Tears in the English Renaissance (Brill, 1996), she returned to medieval monastic and spiritual literature as her true métier and regularly presents papers on Aelred at the annual Cistercian Studies Conference in Kalamazoo and at the Medieval Association of the Pacific. Her current research interest is the crux in translation between accuracy and interpretation.

"All medievalists will rejoice to see the publication of this final volume of the English translation of the sermons of Aelred, abbot of Rievaulx in Yorkshire (1110—1167), a project that has been years in the making. As in the rest of the series, we meet Aelred at home, delivering these talks in the chapter room, surrounded by the monks in his care. Most of these talks were given on the major feast days of the church, of the Blessed Virgin Mary, and of well-known saints. A few exceptions, two sermons for abbots, two for nuns, and one on the martyred St. Katherine, may have been delivered outside the monastery. The inclusion of the recently discovered sermon that Aelred preached for the translation of the relics of St. Edward the Confessor in Westminster Abbey in 1163 is particularly welcome."
Jean Truax