The Memorial of the Abundance of the Divine Sweetness

Gertrud the Great of Helfta; Translated and introduced by Alexandra Barratt 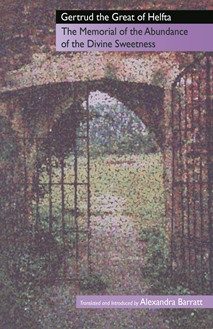 Gertrud the Great (1256–1302) entered the monastery of Helfta in eastern Germany as a child oblate. At the age of twenty-five she underwent a conversion that led to a series of visionary experiences, some of which she recorded in Latin “with her own hand,” in what became Book Two of The Herald of God’s Loving-Kindness, the standard version of her revelations. The other four books were written down by a close confidant of the saint, now often known as "Sister N."

Recently a different version of Gertrud's revelations has been discovered, in an early fourteenth-century manuscript held at the University of Leipzig, Germany, much older than the known manuscripts of The Herald. The Memorial of the Abundance of the Divine Sweetness is shorter than The Herald, and while the two versions have some text in common (notably most of The Herald's Book Two), the new manuscript also contains some completely new material, which sometimes modifies and sometimes complements what readers already know of the saint.

Alexandra Barratt is professor emeritus at University of Waikato, New Zealand. She studied at the Universities of Cambridge and Toronto and has published extensively on religious writing by medieval women in Latin and English. She has previously translated Books One and Two (CF 35), Book Three (CF 63), Book Four (CF 85), and Book Five (CF 86) of The Herald for the Cistercian Fathers series.

"With this book, Alexandra Barratt completes her translation of all the extant writings attributed to Gertrud of Helfta. Working from digital images of the recently discovered Leipzig Codex MS 827, Barratt provides us with a clear and accessible English translation of the manuscript even before a Latin edition has been published. Scholars of Gertrud will appreciate Barratt’s careful and fastidious work with the manuscript. Her translation notes in bold all material that is unique to the Leipzig manuscript, which is not found in the previous translation of Gertrud’s Legatus Divinae Pietatis, and her introduction highlights new information gained about Getrud and the Helfta community."
Ella L. Johnson, PhD, St. Ambrose University, Davenport, Iowa

"In The Memorial of the Abundance of the Divine Sweetness, Alexandra Barratt, provides an excellent translation of what seems to be an earlier, more intimate, less guarded version of Gertrude the Great’s, Herald of Divine-Loving-Kindness, which Barratt previously translated. Working directly from the only known and recently discovered manuscript of the Memorial, she provides a helpful introduction and annotates its sources. To paraphrase Gertrude, those who read this book with intent devotion will surely, by God’s grace, find something profitable."
Fr. Hugh Feiss, OSB, Monastery of the Ascension, Jerome, Idaho