The Meditations with a Monastic Commentary 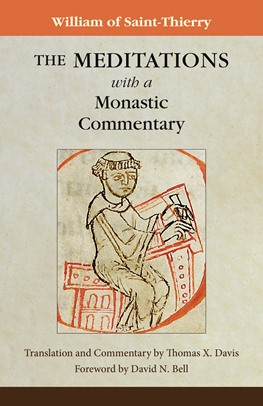 William of Saint-Thierry (ca. 1080–1148) was a Benedictine abbot of the Abbey of Saint-Thierry and a close friend of Bernard of Clairvaux. Because of this friendship, toward the end of his life he became a Cistercian monk at Signy l’Abbaye in the Ardenne forest. Twenty-one of his writings extant today establish his enduring legacy as a distinguished theologian of Trinitarian doctrine, Christology, and contemplative prayer.

Thomas X. Davis, OCSO, has translated two works of William—The Mirror of Faith (1979) and The Nature and Dignity of Love (1981)—and published several articles on William and monastic subjects. He is the abbot emeritus of the Trappist-Cistercian Abbey of New Clairvaux.

"Father Thomas Davis takes his readers on an extraordinary journey through the depths and heights of William of Saint–Thierry’s spirituality. The revised translation and commentary illuminate the complexity of early Cistercian thought through the lens of William’s poetic imagery. Offering a guided tour through the metaphorical landscape of William’s meditations, Father Davis provides intellectually rich insight, as well as a personal appreciation of Cistercian spiritual practice. This book is a source both for future Cistercian scholarship and for anyone who is drawn to the experiential, authentic nature of monastic prayer.“
Dr. des. theol. Delphine Conzelmann, University of Basel, Switzerland

“You have made us for yourself, O Lord, and our hearts are restless until they rest in you.” So wrote St. Augustine at the beginning of his Confessions, one of the most remarkable prayer-texts in the Christian tradition. Some 700 years later, a closely related insight drove William of St. Thierry to pen the meditative prayers of this book. Blessed with an intimate knowledge of the Bible and the medieval interpretive tradition, a poetic sense of imagery, a refined Christian metaphysics, and an ardent personal faith, William delivered a remarkable text to guide thoughts to God. This new volume gives us a precious new portal into one of Christian history’s outstanding minds."
Fr. Joseph Van House, O Cist, Our Lady of Dallas Abbey, University of Dallas

"Thomas Davis makes an invaluable contribution in his fresh translation of the Meditations and his insightful commentary on William’s account of the contemplative ascent into God, situating the abbot of Saint-Thierry’s spiritual itinerary in his broader theological vision. That ascent is motivated by ardent love and longing to see God’s face, yet paradoxically necessitates a descent into the truth of a person’s deepest self where one comes face to face with one’s utter brokenness and the need to die to self. There one also discovers the truth of one’s unimaginable beloved-ness in the eternal Word. Ascending then through the Incarnation, one’s will is united with God’s love—the Holy Spirit—in the unitas spiritus where one’s life is transformed and one’s spirit is enfolded the ineffable embrace of the Divine Persons of the Trinity."
Glenn E. Myers, PhD, Professor of Church History and Theological Studies, Crown College