Grimlaicus; Translated with an Introduction and Notes by Andrew Thornton 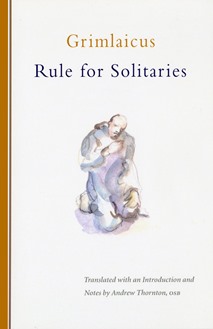 The monk Grimlaicus (ca. 900) wrote a rule for those who, like himself, pursued the solitary life within a monastic community. Never leaving their cell yet participating in the liturgical life of the monastery through a window into the church, these "enclosed" sought to serve God alone. Beyond the details of horarium, reception of newcomers, diet, and clothing, Grimlaicus details practical measures for maintaining spiritual, psychological, and physical health, and for giving counsel to others. Scripture, the Rule of St. Benedict, and the teachings of early ecclesial and monastic writers form the kernel of Grimlaicus’s wise and balanced rule, presented here for the first time in English translation.

Andrew Thornton is a monk of Saint Anselm Abbey and associate professor in the department of Modern Languages at Saint Anselm College, where he teaches German language and Chinese philosophy. He is organist in the abbey church. He translated the poems of the twelfth-century recluse Ava, the first woman to write in a European vernacular (The Poems of Ava, Liturgical Press).