The Blessing Of Blessings

Gregory of Narek's Commentary on the Song of Songs 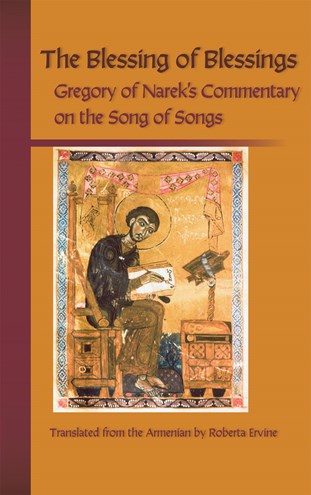 Gregory of Narek (c. 945-1003), a monk and a priest, is best know for his poetic works, and one of the few armenian commentators on the Song of Songs, which was so great a focus among western monastic writers of the patristic and medieval periods. Living during a period of cultural and religious renaissance which preceded the Turkish and Mongol invasions of Armenia, and in a period of conflict between the non-Chalcedonian Christians of his native land and their Byzantine neighbors, Grigor worked from the Armenian text of the Song, which is slightly longer than the Septuagint or Hebrew versions and contains passages which vary from them. In his commentary Grigor traces themes and draws on other scriptural books to remind readers that every human person is endowed with an innate love for God which, in his words, 'cannot be sapped'.

Roberta Ervine received her doctorate in Middle East Languages and Cultures from Columbia University. She has studied in Jerusalem with Archbishop Norayr Bogharian, late curator of manuscripts for the Monastery of Saint James in Jerusalem, and with Bishop Guregh Kapikian, Armenian Overseer of the Status Quo in the Holy Places. While there she taught Armenian studies at both Jerusalem's Holy Translators' Academy, and the Hebrew University. Currently she is Professor of Armenian Studies at St. Nersess Armenian Seminary in New Rochelle, New York, and concentrates on the history of the Armenians in Jerusalem, and medieval Armenian literature and spirituality.

By translating Gregory of Narek's Commentary on the Song of Songs, Roberta Ervine has done a wonderful service in making the riches of Armenian Christianity available to a wider audience. . . . This book is a must for anyone interested in the history of the exegesis of the Song of Songs and is recommended for students of Armenian Christianity or monastic spirituality.
The American Benedictine Review

Encouraging Christians that the love of God is immortal, The Blessing of Blessings is recommended for Christian scholars and non-specialist general readers alike.
Midwest Book Review