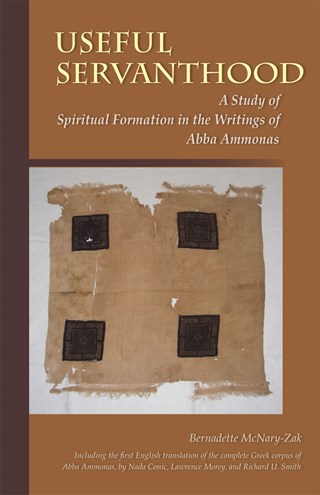 Useful Servanthood introduces English-speaking readers to Abba Ammonas, disciple and successor of Saint Antony of the Desert and a prominent figure of fourth-century Egyptian monasticism. As a director of souls, Ammonas's approach to spiritual formation was a creative example of the spiritual gift of discernment. By examining Ammonas's writings and his ecclesial and political milieus, Dr. McNary-Zak shows how discernment functioned both in the abba-disciple relationship of the desert monks and in the life of the wider Christian community. Thus, Ammonas serves as a model for spiritual directors of the twenty-first century. The second part of the book makes available for the first time in English the entire Greek corpus of Abba Ammonas’s writings.

Bernadette McNary-Zak, PhD, is associate professor of religious studies at Rhodes College, Memphis, Tennessee, where she teaches courses in early Christian literature and in the humanities program.

Richard Upsher Smith, Jr., earned an MDiv from Harvard Divinity School in 1982, and a PhD in Classics from Dalhousie University in 1991. He currently teaches Classics at Franciscan University of Steubenville where he is also chairman of the Department of Classics. Dr. Smith has published scholarly articles on Classical, Medieval, and Reformation subjects, as well popular essays on theological topics. He is married with twin sons and one grandson.