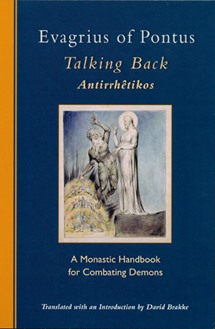 A Monastic Handbook for Combating Demons
Evagrius of Pontus; Translated with an Introduction by David Brakke

How did the monks of the Egyptian desert fight against the demons that attacked them with tempting thoughts? How could Christians resist the thoughts of gluttony, fornication, or pride that assailed them and obstructed their contemplation of God? According to Evagrius of Pontus (345 '399), one of the greatest spiritual directors of ancient monasticism, the monk should talk back to demons with relevant passages from the Bible. His book Talking Back (Antirrhêtikos) lists over 500 thoughts or circumstances in which the demon-fighting monk might find himself, along with the biblical passages with which the monk should respond. It became one of the most popular books among the ascetics of Late Antiquity and the Byzantine East, but until now the entire text had not been translated into English. From Talking Back we gain a better understanding of Evagrius's eight primary demons: gluttony, fornication, love of money, sadness, anger, listlessness, vainglory, and pride. We can explore a central aspect of early monastic spirituality, and we get a glimpse of the temptations and anxieties that the first desert monks faced.

David Brakke is professor and chair of the Department of Religious Studies in the College of Arts and Sciences of Indiana University. He studied ancient Christianity at Harvard Divinity School and Yale University. Brakke is the author of Athanasius and Asceticism and Demons and the Making of the Monk: Spiritual Combat in Early Christianity, and he edits the Journal of Early Christian Studies.

This is a very practical, dealing-with-the-issues kind of lectio divina. The monks of Evagrius' time considered this a read spiritual treasure. The same treasure is now available to us in English.
American Benedictine Review


With much wisdom and thought, Evagrius of Pontus is a must read for anyone who wants to best understand ancient Christianity and learn about its roots.
Midwest Book Review


This work makes available to the English readership a work that not only offers a fuller appreciation of the spirituality of Evagrius and his psychology but provides as well a more concrete understanding of the psychology and struggles of the early monks in the Egyptian desert.
Cistercian Studies Quarterly