The Holy Workshop Of Virtue

The Life of John the Little by Zacharias of Sakha 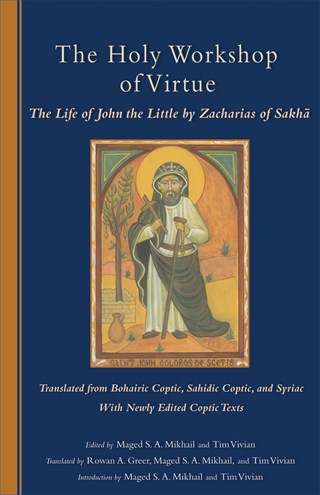 Saint John the Little was a monk and hegumen of Scetis (Wadi Natrun) during the first great period of early Egyptian monasticism. The Apophthegmata preserve some fifty sayings by or about him (see CS 59, 85 '96). In addition, Zacharias, eighth-century Bishop of Sakha, wrote his Life, more than seventy percent of which is composed of material not found in the Apophthegmata. John bears witness to the formative period of early Egyptian monasticism. His Life, with its emphasis on obedience and compassion, offers a lively witness to the earliest monastic traditions and to their transmission and continuing importance in the Coptic Church.

This book contains an introduction to the textual history of the Life of Saint John the Little (339 '409) along with fresh English translations of the Bohairic and the Syriac Lifes of John the Little plus the definitive Bohairc Life in the Coptic text. It will be of interest particularly to academics, monastics, and others interested in monasticism, early Christian monasticism, early Church History, the Coptic Church, or monastic spirituality.

Tim Vivian is associate professor of religious studies at California State University, Bakersfield. He is the author of numerous books and articles on early Christian monasticism, including The Life of Antony (with Apostolos N. Athanassakis), CS202, and Becoming Fire: Through the Year with the Desert Fathers and Mothers, CS225, both published by Cistercian Publications.

Rowan Greer is the Walter Gray Professor Emeritus of Anglican Studies at Yale Divinity School. His scholarly work has been primarily in patristics. Retired since 1997, he lives in New Haven, Connecticut.

Maged S. A. Mikhail is assistant professor of history at California State University, Fullerton. His publications and research focus on the history of Egypt during the early Islamic period.

Overall, this volume is a model for the presentation of an ancient monastic document, setting it in the context of the tradition, raising the significant questions, and indicating routes to further study.
The American Benedictine Review