The Medieval Experience of Reading 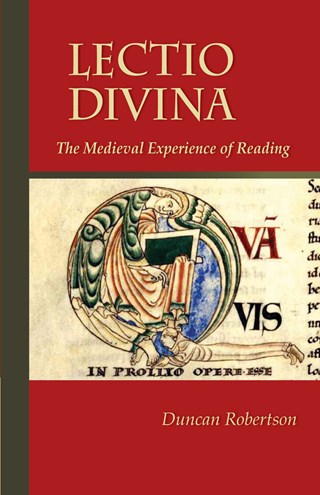 During the Middle Ages the act of reading was experienced intensively in the monastic exercise of lectio divina--the prayerful scrutiny of passages of Scripture, savored in meditation, memorized, recited, and rediscovered in the reader's own religious life. The rich literary tradition that arose from this culture includes theoretical writings from the Conferences of John Cassian (fifth century) through the twelfth-century treatises of Hugh of St. Victor and the Carthusian Guigo II; it also includes compilations, literary meditations, and scriptural commentary, notably on the Song of Songs. This study brings medievalist research together with modern theoretical reflections on the act of reading in a consolidation of historical scholarship, spirituality, and literary criticism.

Duncan Robertson makes a compelling argument for the re-examination of early monastic reading practices and medieval theory, engaging with modern research on literacy, memory, reception, and cognition. With impressive erudition and remarkable lucidity, he challenges modern literary theorists to explore the implications of spiritual reading for the interpretive process. This study will be welcomed not only by specialists of medieval spirituality and medieval literature, but also by scholars investigating the history of reading in the West.
Catherine M. Jones, Professor of French and Proven�al, Graduate Coordinator, Romance Languages, University of Georgia

This is an excellent book quite suited to a serious reader and devotee of the subject. It is refreshing to see such a seminal book published in a market where the breezy and superficial so often garners attention. The author has worked with the leading authorities and resources on the subject, and articulated them in a very comprehensible and coherent manner. Nothing less than a must read for serious students of lectio divina.
Karl A. Schultz, Author of How to Pray with the Bible