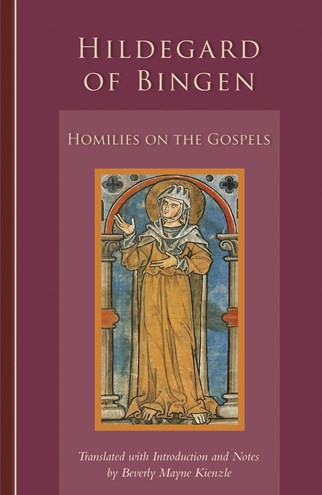 Homilies on the Gospels

Hildegard of Bingen (1098—1179) describes the virtue of Fortitude teaching the other virtues in the fire of the Holy Spirit. Like Fortitude, Hildegard was enkindled by the Holy Spirit and edified many with her teaching.

Hildegard of Bingen's Homilies on the Gospels are here translated for the first time from Latin into English. Hildegard's sisters recorded and preserved her informal preaching in this collection of homilies on twenty-seven gospel pericopes. As teacher and superior to her sisters, Hildegard probably spoke to them in the chapter house, with the scriptural text either before her or recited from memory, according to Benedictine liturgical practice. The Homilies on the Gospels prove essential for comprehending the coherent theological vision that Hildegard constructs throughout her works, including the themes of salvation history, the drama of the individual soul, the struggle of virtues against vices, and the life-giving and animating force of greenness (uiriditas). Moreover, the Homilies on the Gospels establish Hildegard as the only known female systematic exegete of the Middle Ages.

"This carefully prepared translation of Hildegard's 58 homilies on the Gospels is the work of a scholar who has for many years labored closely both with Hildegard's Latin text and with the broader context of mediaeval exegesis and preaching. . . .The present translation shows attentiveness to the need to make Hildegard accessible to a modern audience, who lack monastic familiarity with biblical texts and with the Cluniac liturgical calendar, and to whom the mediaeval style of allegorical exegesis may be obscure."
Jane Heath, Journal for the Study of The New Testament


Hildegard was a remarkable preacher on the Gospels, able to select and identify core themes that resonated with her visionary imagination. Through her Homilies on the Gospels, translated with freshness and sensitivity by Beverley Mayne Kienzle, we gain a sense of what it would have been like to hear this astonishing woman shed new light on familiar stories. She is fascinated by what the Gospels have to say about human nature, the moral choices confronting humanity and the gift of the five senses-all the time putting forward her message that through the Scriptures, `God brings human beings to rationality, so that through rationality as through the Scriptures they may know God.'
Constant J Mews, PhD, Director, Centre for Studies in Religion and Theology, Monash University, Victoria, Australia


This is a precise, readable, and profitable translation of Hildegard of Bingen's Homilies on the Gospels. Beverly Kienzle is aware of all the problems and technicalities of any translation and solves them with talent and elegance. A book to be read by anyone interested in the Middle Ages, the New Testament, and spirituality.
Fran�ois Bovon, Frothingham Research Professor, The Divinity School, Harvard University


Like much of what Hildegard wrote, these sermons are unique, both in their adherence to a word-by-word analysis of the Gospel readings, as well as in their ingenuity in revealing the salvation-historical and moral meaning of the text. Hildegard was an original interpreter, as Beverly Mayne Kienzle's volume of accurate and readable translations shows.
Bernard McGinn, Divinity School, University of Chicago


The last of Hildegard's major works to be translated, these Homilies on the Gospels open a startling window onto the world of twelfth-century exegesis. Preached to her nuns in chapter, they reveal the dramatic triumph of allegory over the literal sense: the wedding at Cana becomes the creation of humankind, while the holy women asking who will roll the stone from Christ's tomb stand for the Old and New Testaments exhorting each other. The in-house preaching of abbesses is almost entirely lost, but Hildegard's fame enabled this rare survival of a forgotten genre. Beverly Kienzle's magisterial translation is essential reading for all students of high medieval preaching, exegesis, and monastic life.
Barbara Newman, Professor of English, Religion, and Classics, Northwestern University