The Crown of Monks 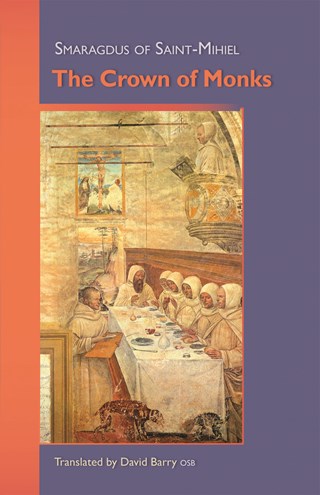 Smaragdus was a monk and abbot of considerable standing in the early ninth century church. His Diadema Monachorum (The Crown of Monks), together with a later commentary on the Rule of Saint Benedict, established him as one of the most significant interpreters of Benedict's Rule in his day and for succeeding generations.

Smaragdus intended The Crown of Monks as a daily resource for monastic communities, to be read at the evening chapter. He sought to arouse well-established monks "to a keener and loftier yearning for the heavenly country" and "to strengthen and instill fear" in weaker monks.

In this gathering of excerpts from various respected sources, a genre known as the florilegium, Smaragdus addresses a wide variety of topics perennially significant to monks. It offers rich material for lectio and meditation, forming monastic minds and hearts for facing whatever challenges come their way, linking them with the formative years of the monastic tradition, and pointing them to the final goal: the kingdom of heaven.

David Barry, OSB, made solemn profession at the Abbey of the Holy Trinity, New Norcia, Western Australia, in 1960. He has studied at Sant'Anselmo, Rome, and Saint Benet's Hall, Oxford, as well as Murdoch University. In addition to doing parish work, teaching, working in monastic formation, and giving spiritual direction and retreats in Australia, he has taught in China and done archival research in Europe on his monastery's founders.

Abbot Smaragdus of Saint-Mihiel (760-830) was a monk whose heart and mind were steeped in Scripture and the church doctors and fathers. Drawing from the best of his sources and his own lived experience, he wrote The Crown of Monks to provide a source of daily guidance, encouragement, and challenge for his monks. Thanks to this translation by David Barry, the wisdom of Smaragdus is now available to us who follow the monastic path today. Barry provides an introduction to Smaragdus and his works that will be of interest to both general readers and academics.
Sr. Colleen Maura McGrane, OSB, Liturgist, Benedictine Sisters of Perpetual Adoration, Clyde, Missouri