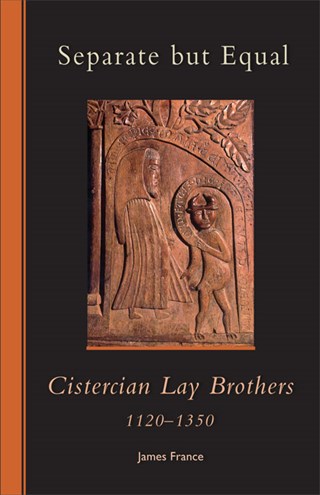 The institution of the lay brotherhood was not original to the Cistercians, but they developed it to its fullest extent. Although lay, the conversi were under the same vows as monks and represented a new form of religious life. While monks were bound to the recitation of the Divine Office, the lay brothers were dedicated to a life of toil and acted as the monks' auxiliaries. Their contribution to the spiritual and material life of the Cistercian Order was immense.

By consideration of tales from the exemplum literature, evidence from general chapter statutes, and information on the architectural provisions made for the lay brothers in the abbey and on the outlying granges, this book puts flesh on the bare bones of a life directed by their own Usages. The book is richly illustrated with images from manuscripts, stained glass, and architectural sculpture.

James France received his PhD from Roskilde University, Denmark. He is the author of The Cistercians in Scandinavia, The Cistercians in Medieval Art, and Medieval Images of Saint Bernard of Clairvaux, all published by Cistercian Publications. Dr. France is a Fellow of the Society of Antiquaries.

"An important and comprehensive contribution to our understanding of this group that has all too often taken something of a back seat in modern scholarship. In his thorough assessment France illuminates the contributions of the conversi to the Cistercian story, looking at lay brothers in medieval and modern scholarship."
Karen Stöber, The Journal of Medieval Monastic Studies

Separate but Equal is at once eminently erudite and commendably readable. James France's authoritative volume will be of immense valuable not only for students of the Cistercian Order but for anyone interested in medieval religious culture.
Mette Birkedal Bruun, University of Copenhagen

With this book, we finally have a comprehensive history of the medieval Cistercian lay brothers. James France skillfully employs a wide range of sources to illuminate the lay brothers' social origins, their economic functions, and their religious ideals, and he carefully assesses both the lay brothers' contributions to the Order and their eventual decline. He convincingly argues that the medieval Cistercians never resolved the tensions created when they formed the lay brotherhood as an institution separate from the monks but never equal to them. France explores the ramifications of these tensions with great sensitivity, and he argues that it was this fundamental inequality between monks and lay brothers that ultimately led to the lay brothers' demise.
Martha Newman, University of Texas at Austin, Author of The Boundaries of Charity: Cistercian Culture and Ecclesiastical Reform, 1098-1180