Moral Reflections on the Book of Job, Volume 1 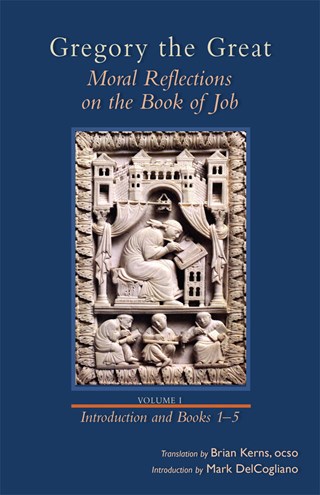 Gregory the Great was pope from 590 to 604, a time of great turmoil in Italy and in the western Roman Empire generally because of the barbarian invasions. Gregory's experience as prefect of the city of Rome and as apocrisarius of Pope Pelagius fitted him admirably for the new challenges of the papacy. The Moral Reflections on the Book of Job were first given to the monks who accompanied Gregory to the embassy in Constantinople. This first volume of the work contains books 1-5, accompanied by an introduction by Mark DelCogliano.

Br. Brian Kerns has been a Trappist for fifty-eight years: seventeen years at the Abbey of Gethsemani in Kentucky, and the rest at the Abbey of the Genesee in upper New York state, interrupted by a year at Oxford, North Carolina, and five years at Genesee's foundation of Novo Mundo in Parana, Brazil. He hails originally from Pottsville, in the anthracite coal region in Pennsylvania. For many years he worked in the library at Genesee and Novo Mundo and he has interested himself in various translation projects, including translating a book about the Abbot General of the Trappists in the early 1960's titled, Dom Gabriel Sortais: An Amazing Abbot in Turbulent Times published by Cistercian Publications, in the Monastic Wisdom series.

"Gregory the Great: Moral Reflections on the Book of Job, volume 1, has a great deal to offer the modern reader. Throwing off the constraints of the historical critical method, while not denying its importance, can lead not only into new insights but to a profound illumination of the connection between the Church fathers and post-Vatican thought."
Paul Lockey, Cistercian Studies Quarterly

"One is hard-pressed to find a good English translation of Pope St. Gregory's Moralia in Job, and even harder-pressed to find an English translation that appeals to twenty-first century readers. Kearns presents a translation that is `clear, elegant, idiomatic, and readable without sacrificing accuracy.' It is precisely because of the universal themes present in the book of Job, and Gregory's contemplative and practical reading of them that make the Moralia in Job a classic: highly appreciated at the time and centuries thereafter, and with this new and refreshing translation, hopefully to be treasured by our contemporaries."
Benedict M. Guevin, OSB, American Benedictine Review