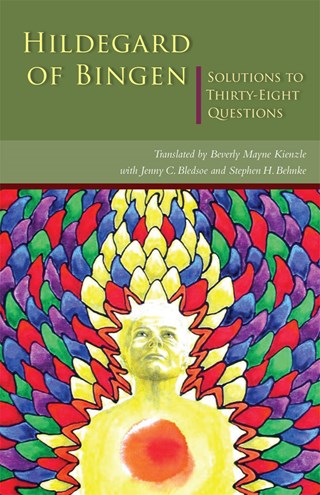 Perhaps the least studied of Hildegard of Bingen's writings, Solutions to Thirty-Eight Questions is translated in this volume into English for the first time from the original Latin.

In this work of exegesis, Hildegard (1098-1179) resolves thorny passages of Scripture, theological questions, and two issues in hagiographic texts. Solutions to Thirty-Eight Questions joins Hildegard's Homilies on the Gospels, which were directed to her nuns, as evidence of the seer's exegetical writing as well as her authority as an exegete. The twelfth-century saint wrote in standard genres of exegesis—homilies and solutiones—and her interpretations of Scripture were widely sought, including by male audiences.

Beverly Mayne Kienzle is the John H. Morison Professor of the Practice in Latin and Romance Languages and lecturer on medieval Christianity at Harvard Divinity School. Her research and writing focus on the place of preaching and sermons in the history of medieval religion and on evidence for women's preaching in monastic, lay, and dissident communities. Her publications include Hildegard of Bingen: Homilies on the Gospels from Cistercian Publications and Hildegard of Bingen and Her Gospel Homilies: Speaking New Mysteries. Kienzle has also co-edited Hildegard of Bingen's Expositiones euangeliorum and A Handbook on Hildegard of Bingen.

Anyone studying Hildegard's works and/or the various styles of textual interpretation in the Middle Ages will need to consult this small book and be grateful to Kienzle and her translators for their work which not only elucidates Hildegard's "range of exegetical knowledge and methods" for modern readers but also shows how she both used and transcended the categories and literary models used by the men of her times.
Marianne Burkhard, OSB, St. Mary Monastery, Rock Island, IL, American Benedictine Review