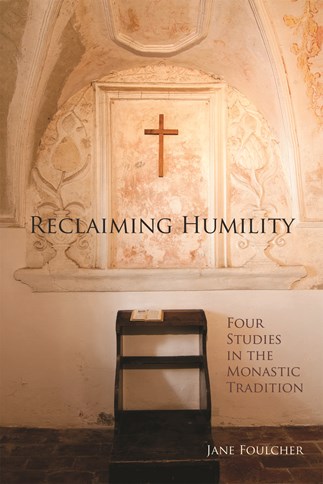 Does humility have a place in contemporary life? Were Enlightenment thinkers wrong to reject humility as a "monkish virtue" (Hume) arising from a "slave morality" (Nietzsche)? Australian theologian Jane Foulcher recovers the counter-cultural reading of humility that marked early Christianity and examines its trajectory at key junctures in the development of Western monasticism. Humility emerges not as a moral virtue achieved by human effort but as a way opened by grace-as a divine "climate" (Christian de Chergé) that we are invited to inhabit.

From fourth-century Egypt to twentieth-century Algeria, via Saint Benedict and Saint Bernard of Clairvaux, Dr. Foulcher's compelling analysis of theology and practice challenges the church to reclaim Christian humility as essential to its life and witness today.

Jane Foulcher is an Anglican priest on the theology faculty of Charles Sturt University, Canberra, Australia.

This book seriously explores the marginalization of humility in the modern world and in contemporary Christian life by tracing the history of humility from the Greco-Roman philosophical traditions and Judeo-Christian origins to major monastic sources of teaching on humility from the desert monks, the Rule of Benedict, Bernard of Clairvaux, and Christian de Cherg� and the monks of Tibhirine. The breadth and depth of each chapter guides the reader to the significance and reevaluation that humility offers for Christian living, whether one is a monk or married person, by the transforming grace of Christ's own kenosis. I hope that every monastic house and theological library offers this fine study of humility, in its many facets, for its readership to read, ponder, and reflect with others.
Mary Forman, OSB, Associate Professor of Monastic Studies, Saint John's School of Theology and Seminary


This wonderfully clear and insightful introduction to so central a topic will be of immense help to students and scholars. At a moment when the spiritual formation of Christian theology is emerging once more as central to our understanding of Christianity, Reclaiming Humility provides a deeply thoughtful and well-researched consideration of this difficult, indispensable, sometimes dangerously misused, life-generating virtue.
Mark A. McIntosh, Professor of Christian Spirituality, Loyola University, Author of Divine Teaching: An Introduction to Christian Theology


Jane Foulcher's important book returns our attention to the neglected topic of humility. A long spiritual tradition regards this virtue as fundamental to the imitation of Christ, but moderns often disparage it as detrimental to our sense of human dignity and self-worth. Turning to such sources as the desert fathers, John Cassian, Benedict of Nursia, and Bernard of Clairvaux, Foulcher recovers the crucial links that unite Christian humility with human dignity and charity. In a stunning final chapter, Foulcher turns to the practice of humility among the monks of Tibhirine, martyred in Algeria in 1996. Foulcher concludes that a reclaimed humility is vital to the Christian way in the twenty-first century. Highly recommended.
Ann Astell, Professor of Theology, The University of Notre Dame


"Reclaiming Humility represents a gentle but decisive rejoinder to a characteristically modern dismissal of the `monkish virtues' as worthless. Jane Foulcher shows that David Hume did know what he was talking about."
Scott Cowdell, St. Mark's Review


"There is an impressive range of field she undertakes to examine: humility in the tradition of the desert monasticism in the fourth and fifth centuries, humility in the Rule of St. Benedict, humility in St. Bernard and Cistercian movement, and humility in the monastic community of Tibhirine in Algeria. These four areas of study are handled with ease in writing style that ultimately delivers a deep consideration of material from the period in question."
Jeremy Driscoll, OSB, American Benedictine Review