An Invitation to the Christian Life 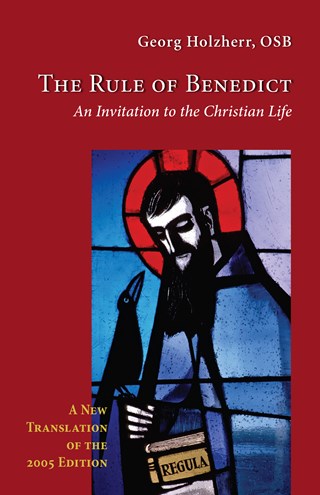 In his introduction to this commentary on the Rule of Benedict, Abbot Georg Holzherr offers this analogy: "The Rule is comparable to an old heavy red wine that is enjoyed in small sips. . . . Head and heart, soul and mind should taste the words of the Rule, just as the eye enjoys the color of the wine while tongue, nose, and mouth take in the delightful gift of God each in their own way."

In this new translation, based on the completely revised seventh edition of Die Benediktsregel, Holzherr has created a profoundly rich commentary using up-to-date research methods and the latest translations of ancient monastic texts. At the same time, this commentary is meant not only for experts in the field of ancient monasticism but also for all lay and monastic readers interested in delving into the teachings and spirituality of Saint Benedict and his spiritual predecessors in the East and in the West.

This edition also features a completely revised and expanded introduction and commentary. New research in the field of early monasticism is offered, including new insights into the monastic life of women. Finally, the updated bibliography and a detailed index are valuable tools for anyone wanting to explore the extraordinary world of Saint Benedict.

Georg Holzherr, OSB, entered monastic life at the Abbey of Einsiedeln in Switzerland in 1949. Upon completing studies in Einsiedeln and Rome, he received the Dr. jur. can. and began teaching at the Theologische Schule Einsiedeln in 1957. He was elected abbot of Einsiedeln Abbey in 1969. Holzherr is recognized as one of today's leading experts on the Rule of Saint Benedict and its sources, spirituality, and applicability to everyday life.

Mark Thamert, OSB, was a monk of Saint John's Abbey, Collegeville, Minnesota. Since receiving his PhD in Germanic languages and literatures from Princeton University in 1985, Thamert taught all levels of German in the Language and Cultures Department at the College of Saint Benedict and Saint John's University. Fr. Mark died at the age of 66 in April, 2017, after a courageous battle with cancer.

"The Rule of Benedict is recommended for all academic and theological libraries."
John Leonard Berg, Catholic Library World

"Georg Holzherr clarifies and deepens our understanding of Benedict's Rule through his knowledge of many other monastic rules available in Benedict's time. He shows Benedict's intention to shape cenobitic life as an extension of baptismal vows, revealing why the Rule is a reliable guide to the Christian life not only for monastics but also for oblates and others. This is not a dry tome but rather a book evoking the love Benedict mentions so often. My heart leapt in me at times when reading Holzherr's book."
Norvene Vest, PhD, Obl. OSB, Author of Preferring Christ and What Is Your Practice: Lifelong Growth in the Spirit

"I heartily recommend the commentary of Abbot Georg Holzherr on the Rule of Benedict. Abbot Georg was abbot of Einsiedeln Abbey when he first published this commentary about 1980. Even as a busy abbot, he must have continued to keep abreast with the new research on the Rule, because after his retirement he published a new edition, which we have here. Holzherr is especially good on the patristic background of the Rule, but he is an overall judicious commentator."
Terrence G. Kardong, OSB, Assumption Abbey

"Abbot Holzherr's The Rule of Benedict has not only brought forward the careful literal, symbolic, and moral imperatives embedded in the Rule but also raised up a clear and compelling mystical voice that gives meaning and significance to all of us who claim Benedict as teacher. The rule prescribes spiritual journey for those of us in the monastic way of life. Holzherr lifts up the contemplative experience of this lifetime while we are on our way. "
Meg Funk, OSB

"It is Holzherr's deep immersion, both scholarly and experientially, in the sources that Benedict absorbed, appropriated and translated into action, that brings such richness to his commentary. The reader is invited to feast in this richness and allow it to expand her heart and stretch her horizon of what it means to respond to the daily invitation of Christian discipleship."
Tjurunga

"This new edition is a different book from the first because of the extensive revision and the addition of insights from the secondary literature of the intervening years. This type of commentary is a welcome addition in monastic formation programs and can also be used by any monastic for spiritual reading beyond technical study."
Jerome Kodell, OSB, American Benedictine Review

"This is an excellent volume for graduate studies on early monasticism or on Benedictine spirituality. It is also a good volume for monastic formation, for Oblates, or indeed anyone who is sincerely interested in seeking God. Holzherr is a wise guide and spiritual father to his readers."
Christine Fletcher, Catholic Books Review

"In his commentary on the Rule of Saint Benedict Georg Holzherr combines contemporary, accessible language, long experience of monastic life, and an exhaustive grasp and judicious use of the ancient Christian sources of Benedict's Rule. Holzherr's interest is pastoral and spiritual. To those who wish to live a vibrant Christian discipleship, Holzherr presents the Rule as a vade mecum that breathes the always-fresh air of the ancient monastics. This exposition of the Rule is a welcome complement to the major critical commentaries. It is, in addition, an excellent tool for monastic formation."
Abbot Mark Scott, OCSO, New Melleray Abbey