Moral Reflections on the Book of Job, Volume 6 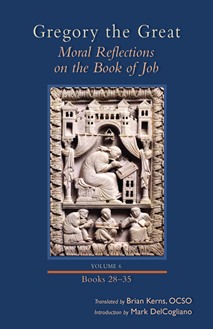 Gregory the Great was pope from 590 to 604, a time of great turmoil in Italy and in the western Roman Empire generally because of the barbarian invasions. Gregory’s experience as prefect of the city of Rome and as apocrisarius of Pope Pelagius fitted him admirably for the new challenges of the papacy. The Moral Reflections on the Book of Job were first given to the monks who accompanied Gregory to the embassy in Constantinople. This sixth volume, containing books 28 through 35, provides commentary on five chapters of Job, from 38:1 through 42:17. The present volume contains the Lord’s appearing to Job out of the whirlwind, the Lord’s two lengthy speeches to Job and Job’s responses, and, finally, the Lord’s rebuke to Job’s friends and restoration of Job’s fortunes. Finally, Gregory speaks of his intention in writing this long work and requests that his readers grant him their prayers and tears. Includes comprehensive indexes for volumes 1-6.

Br. Brian Kerns has been a Trappist for sixty years, seventeen years at the Abbey of Gethsemani in Kentucky, and the rest at the Abbey of the Genesee in upper New York state, interrupted by a year at Oxford, NC, and five years at Genesee’s foundation of Novo Mundo in Parana, Brazil. He hails originally from Pottsville, in the anthracite coal region of Pennsylvania. For many years he worked in the library at Genesee and Novo Mundo, and he has interested himself in various translation projects, among which is the life of Dom Gabriel Sortais, abbot general of the Trappists in the early 1960s. That volume has also been published by Cistercian Publications, in the Monastic Wisdom series. The five previous volumes of his translation of Gregory the Great’s Moral Reflections on the Book of Job were published by Cistercian Publications between 2014 and 2017.