Saint Æthelwold of Winchester; Translated and Introduced by Jacob Riyeff 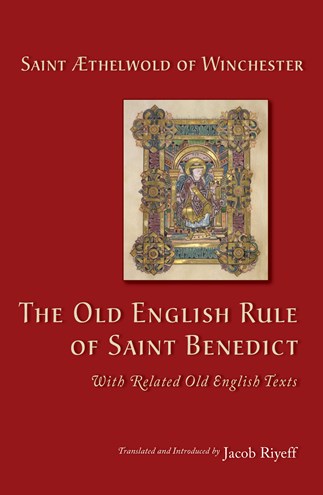 "Dr. Riyeff's book performs a valuable service for all who are interested in the medieval reception of Benedict's Rule. Most usefully, Riyeff's fluent translation of the often difficult Old English version of the Rule encloses in angled brackets all of the more substantial additions and alterations that the tenth-century translator, Bishop Æthelwold of Winchester, made to the Latin original. Such marking, combined with Riyeff's lucid commentary, allows readers to appreciate at a glance the many differences, often small but telling, that make Æthelwold's version worth study in its own right."
Christopher A. Jones, Ohio State University

"A useful companion not only for anyone examining the Old English Rule of Saint Benedict but also for scholars of its author Bishop Æthelwold and monastic reform generally."
Speculum

"The vast corpus of Old English literature captures a fascinating cultural exchange as Latin learning was translated into a Germanic vernacular. For too long, this material has been largely unread outside of linguistic or English departments, and scholars of religious history have been unaware of its contents. Jacob Riyeff's new translation of The Old English Rule of Saint Benedict is part of a new wave of scholarship bringing these treasures to a wider audience. In this work, Riyeff makes accessible a seminal text of the Benedictine Reform translated by its foremost intellect, St. Æthelwold of Winchester. Appendices gather together further Old English witnesses to the context and influence of this text. Riyeff's commendable translation is well introduced and annotated, drawing on the best recent scholarship from both Benedictine studies and Old English. No student of the Anglo-Saxon church should be without this book."
Derek Olsen, author of Reading Matthew with Monks: Liturgical Interpretation in Anglo-Saxon England

"This terrific book will be a boon both to scholars of the history of Benedictine monasticism and to those who seek to explore the spirituality of St. Æthelwold and his reform. The scholarly apparatus will facilitate deep study of the Old English Rule as well as its affinity with the Latin Rule. The translation, while eloquent, is faithful to Æthelwold's own language and to his intentions for the education of monastics."
Julie Ann Smith, Senior Lecturer in Medieval History, University of Sydney