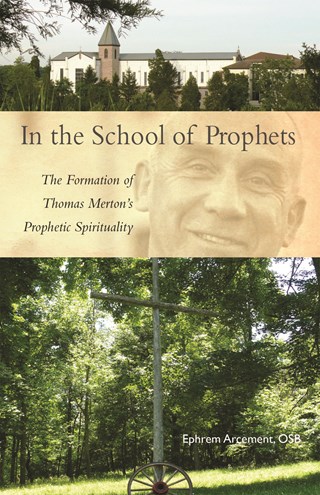 In the School of Prophets

The distinctive prophetic quality of Thomas Merton's spirituality, shaped by figures ranging from the Hebrew prophets to Thich Nhat Hanh, emerges from this fresh examination of the works Merton read, responded to, and celebrated in his own writing.

In the School of Prophets examines the final decade of Merton's life, mainly through the lens of his journals and letters, and helps to fill a gap in contemporary Merton studies. William Blake and various Latin American poets; novelists Boris Pasternak, Albert Camus, and William Faulkner; existentialists Søren Kierkegaard and Gabriel Marcel; monks of the Egyptian desert; and Bernard of Clairvaux number among those who helped shape Merton's prophetic consciousness, leading him to reexamine what it means to be both a human being and a contemplative monk of the twentieth century.

Ephrem Arcement, OSB, is a monk of St. Joseph Abbey in Louisiana. He earned his PhD in spirituality from The Catholic University of America, Washington, DC, and currently teaches courses in Scripture and spirituality at St. Joseph Seminary College. His first book, Intimacy in Prayer: Wisdom from Bernard of Clairvaux, appeared in 2013.

"The author shows how Merton brings his own experience of contemplative life into dialogue with a select group of writers, philosophers, poets, activists, social theorists, and religious thinkers of the 19th and 20th centuries and over time develops his own understanding of a prophetic spirituality. This book is not an easy ready, but the time and effort put into it will be amply rewarded, especially when given the state of world in which we find ourselves."
Pauline A. Viviano, Catholic New World


"Ephrem Arcement situates Merton's prophetic life and witness, most pronounced in the final decade of his life, within a much broader understanding of the prophetic vocation, integrating many seemingly diffuse elements from throughout Merton's life. In the School of Prophets is a thoughtful, challenging treatise that underscores Merton's stature as a true man of God, like the prophets of old, calling us forward and challenging us to labor for the fidelity to God to which Merton himself strived. This is a refreshing and vital approach to understanding Merton's prophetic vocation."
Dr. Paul M. Pearson, Director and Archivist, Thomas Merton Center, Bellarmine University


"In the School of Prophets throws fresh light on the integral relationship between prophecy and mysticism in Merton's life and writings. Mining a range of sources sometimes overlooked in Merton studies, Ephrem Arcement ably guides the reader beneath the surface of the many-faceted diamond that is Merton's paradoxical spirituality of solitude and social engagement, resistance and hope. . . . An aptly rich and multilayered study of Merton's Christ-haunted spirituality."
Christopher Pramuk, Associate Professor, Theology, Xavier University