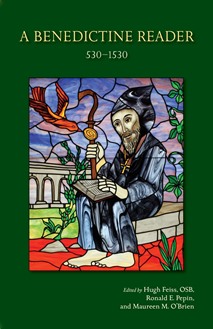 A Benedictine Reader: 530-1530 has been more than twenty years in the making. A collaboration of a dozen scholars, this project gives as broad and deep a sense of the reality of the first one thousand years of Benedictine monasticism as can be done in one volume, using primary sources in English translation. The texts included are drawn from many different genres and from several languages and areas of Europe. The introduction to each of the thirty-two chapters aims to situate each author and text and to make connections with other texts and studies within and outside the Reader. The general introduction summarizes the main ideas and practices that are present in the Rule of Saint Benedict and in the first thousand years of Benedictine monasticism while suggesting questions that a reader might bring to the texts.

Hugh Feiss, OSB, is a monk of the Monastery of the Ascension in Jerome, Idaho. He earned his licentiate in philosophy and his doctorate in theology at Sant'Anselmo and is managing editor of the series Victorine Texts in Translation (Brepols/New City Press). He published Essential Monastic Wisdom, a thematic anthology of Benedictine and Cistercian texts (HarperSan Francisco, 2000). For Cistercian Publications he has translated works of Peter of Celle and Achard of Saint Victor and collaborated on Saint Mary of Egypt: Three Medieval Lives in Verse and The Lives of Monastic Reformers, 1 and 2.

Ronald E. Pepin, received his PhD from Fordham University. In addition to The Lives of Monastic Reformers, 1 and 2 (in collaboration with Hugh Feiss and Maureen O'Brien), his published translations include The Vatican Mythographers (Fordham, 2008), Anselm & Becket (PIMS, 2009), and Sextus Amarcius: Satires (DOML: Harvard, 2011).

Maureen M. O'Brien, is professor in the Department of History at Saint Cloud State University, where she teaches ancient and medieval European history. She edited Stephen of Muret's Maxims and Bernard of Clairvaux's The Parables & The Sentences; she also collaborated with Hugh Feiss and Ronald Pepin on The Lives of Monastic Reformers, 1 and 2.


"A monument to the first millennium of Benedictine tradition. It is particularly welcome to see so many female voices from the Benedictine tradition represented in this volume. The diversity in genre of documents is breathtaking, with poetry, art, music, liturgy, horticulture, hagiography and law among the areas covered, all usually in a Benedictine and theological key."
The Furrow


"The editors provided what Benedictine studies have long lacked: a single volume resource that displays the riches of the Benedictine tradition in an array of genres. Monastics, oblates, and others devoted to the Benedictine way of life will find spirituality nourishing selections. Instructors and students of monastic culture in colleges, monasteries, and seminaries will find a welcome resource that may initially feel overwhelming, but ultimately leaves one wanting more."
Jacob Riyeff, Spirit & Life


"Novice masters will find it to be a useful reference in their novitiate classes. The professed monks, oblates, indeed anyone who is interested in learning more about the monastic way as it has been handed down through the ages will find this Reader valuable and will be grateful for the scholarship and long labor that has gone into its production."
Cistercian Studies Quarterly


"Perfectae Caritatis invited religious to enter into their original sources and primitive inspirations. A Benedictine Reader achieves this by creating a fascinating world of medieval monastic doctrine. This anthology opens up for any interested person ancient sources that fashioned monastic aggiornamento through the centuries. With quite remarkable scholarship, the wealth of footnotes in this volume introduces contemporary authorities promoting this renewal. Together these ancient monastics and contemporary scholars form a valuable treasure for a rebirth in monastic wisdom and insight."
Thomas X. Davis, OCSO, Abbot Emeritus, New Clairvaux Abbey


"A Benedictine Reader is an exciting volume of sources that includes key texts from the Order's inception in 530 through the sixteenth century. These `Benedictine Centuries' demonstrate the rich and varied contributions that knit together the religious, political, social, and cultural fabric of European society throughout the Middle Ages and into the Early Modern period. Translated into fresh and readable English, each text contains a concise introduction that has an almost intuitive quality. This is a welcome addition to the field and is an excellent resource for both scholars and students alike."
Alice Chapman, Associate Professor of History, Grand Valley State University


“A treasure trove of monastic material spanning a thousand years: letters, chronicles, biographies, prayers, legislation, satires, scriptural commentaries, sermons, and a papal decree. Three bibliographies—of Christian authors, classical authors, and secondary sources—plus five indexes round out a hefty, reasonably priced volume that will be of much value and interest for anyone seeking a broader familiarity with one of the most important movements in the history of the church.”
Theological Studies


"A Benedictine Reader brings together in a single volume the Venerable Bede, John of Fécamp, Abelard, Hildegard of Bingen, and other well-known figures of Western medieval monasticism. Also included are lesser known authors and works by anonymous voices. This virtual library of medieval Benedictine texts fills a gaping hole in monastic libraries and will be an excellent resource in monastic formation programs."
Mark A. Scott, OCSO, Abbot of New Melleray, Peosta, Iowa


"Anyone interested in medieval monastic intellectual culture will find this book to be a springboard for jumping into further study or pursuance of the topics found in it. It may find a home in medieval monastic history courses, perhaps not as the basic reader but as one whose diverse authors and genres will be enriching."
American Benedictine Review


"A richly rewarding selection that will surely broaden and deepen any reader's knowledge and appreciation of the Benedictine tradition as it developed from the end of antiquity through the dawn of the modern era."
Catholic Books Review