An Existential and Spiritual Biography 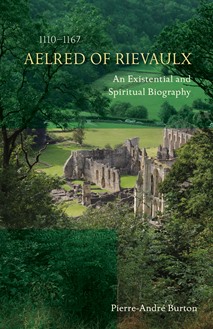 This book places the life of Aelred of Rievaulx, third abbot of the English Cistercian abbey of Rievaulx, within the hundred-year period from the Norman Conquest of England in October 1066 through Aelred's death in January 1167. While exploring what is known of Aelred's life from his own works and especially from the principal work of Walter Daniel, author of The Life of Aelred of Rievaulx, Burton considers the influence of both English and church history on Aelred's personality and purpose as Christian, abbot, and writer. He emphasizes the place of the crucified Christ at the center of Aelred's life while calling spiritual friendship-not only personal but cosmological-the "hermeneutic key" to his teaching.

Pierre-André Burton, OCSO, is abbot of the Cistercian Abbey of Sainte-Marie du Désert. After receiving a degree at the Université Catholique de Louvain-la-Neuve, he entered Notre-Dame de Scourmont Abbey (Chimay) in 1987; he transferred his stability to Désert in 1999. He is on the editorial board of Cîteaux. His Aelred de Rievaulx (1110-1167): Essai de Biographie Existentielle et Spirituelle appeared in 2010, with a supplement in A Companion to Aelred of Rievaulx (:1110-1167), in Brill's Companions to the Christian Tradition 76 (Brill, 2017). The two volumes of his Vers l'infini d'une autre lumière, containing several of his articles from Cîteaux and Collectanea Cisterciensia, were published in 2013 by Pain de Cîteaux.

Christopher Coski is a professor of French and chair of the Department of Modern Languages at Ohio University, where he teaches early modern French literature and the cultural history of France from the Middle Ages to the Revolution. He is the author of From Barbarism to Universality: Language and Identity in Early Modern France (University of South Carolina Press, 2011). His articles on French Enlightenment philosophies of language and mind have appeared in French Forum, French Review, Dalhousie French Studies, Essays in French Literature, and 1650-1850: Ideas, Aesthetics, and Inquiries in the Early Modern Era. He also serves as an assistant editor for the French Review.