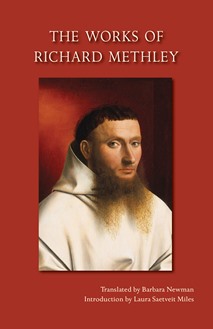 “This book makes available in modern English one of the most significant contributions to the contemplative tradition of fifteenth-century England. By fusing in such a sophisticated way the apophatic and the cataphatic approaches to the contemplative life as part of his experience, Methley’s writings challenge our contemporary desire for categorization and division. The excellent translations by Barbara Newman bring to light the daily mystical experiences and the pastoral concerns of a Carthusian monk following a strict monastic life. Her notes and the outstanding general introduction by Laura Saetveit Miles provide a wealth of information about the rich religious tradition from which Methley’s corpus emerged.”
Denis Renevey, Professor of Medieval English Language and Literature, University of Lausanne

“This lucid new translation of the writings of Richard Methley offers an intoxicating, not to say spiritually inebriated account of his search for union with God. An assiduous reader and translator of earlier contemplative texts, he blends together the languor of Richard Rolle, the apophatic austerity of the Cloud-author, the theological intensity of Heinrich Suso and the devotio moderna, and the liquefying ardour of Marguerite Porete. The resulting synthesis produces a new, urgently prophetic voice of meltingly eloquent spiritual longing existing in transcendent tension with the structures of his daily life as a Carthusian.”
Vincent Gillespie, J.R.R. Tolkien Professor of English, University of Oxford