Thousands and Thousands of Lovers

Sense of Community among the Nuns of Helfta 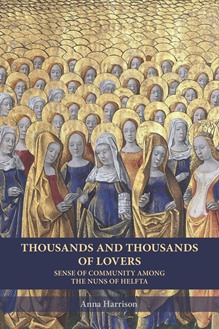 Thousands and Thousands of Lovers examines the spiritual significance of community to the Cistercian nuns of Helfta—a concern that lies at the heart of the monastery’s literature. Focusing on a woefully understudied resource and the largest body of female-authored writings in the thirteenth century, this book offers insight into the religious preoccupations of a theologically expert and intellectually vibrant cloister to reveal a subtle interplay between communal practice and private piety, other-directed attention, and inward-religious impulse. It considers the nuns’ attitudes toward community among themselves and with their household members as well as with souls in purgatory and the saints.

Anna Harrison is professor of theological studies at Loyola Marymount University, where she teaches courses in the history of Christian late antiquity and the Middle Ages. She is currently at work on a monograph titled Paradox: Bernard of Clairvaux's On Loving God and Its Influence.

"This book offers an astonishingly rich reconstruction of the visionary, communal, personal, and literary lives of the nuns of Helfta. It rests on a rich knowledge of their teachings and writings but understands these as born as much from communal experience and insight as the visions or writings of unusually graced individuals. Amidst a larger interpretive literature, much of it not in English, this book follows upon Caroline Walker Bynum’s pioneering introduction of these materials to English-speaking readers a generation ago. It is an attractive and compelling general reflection on the lives and writings of these women, yet thoughtfully focused. Readers will find themselves immersed in its narrative flow as well as its host of illuming and learned notes."
John H. Van Engen, Andrew V. Tackes Professor of Medieval History, Emeritus, University of Notre Dame

"The nuns of medieval Helfta occupy a special place in the history of spirituality, both as individuals and as members of their community. Anna Harrison has given us a much needed book on the writings associated with Mechtild of Hackeborn and Gertrude the Great. She shows how these nuns flourished in their monastic community. Her work is deeply grounded in scholarship, thoughtful, gracefully formulated, and accessible. It will be read for many years to come as a landmark in the study of spirituality."
Richard Kieckhefer, Emeritus Professor of Religious Studies and History, Northwestern University

"In Thousands and Thousands of Lovers, Anna Harrison hones in on the most engaging aspect of Helfta’s spirituality: the nuns’ powerful sense of community. In a period of just fifteen years, these nuns produced a treasure trove of Latin mystical literature, creating a utopian vision of their monastic life as an icon of the kingdom of heaven. Exploring the sisters’ loving relationships with one another, with clergy and laity, with the dead in purgatory and the saints in heaven, Harrison shows that mysticism is not just a pursuit for the lonely soul in its solitude. It can be—and at Helfta it is—the most profoundly social of all human activities."
Barbara Newman, Northwestern University

"In Thousands and Thousands of Lovers, Anna Harrison offers a rich and engaging account of women’s religious community during the thirteenth century, focusing on the German monastery at Helfta—the period’s most important and prolific center of women’s religious writing. Considering the Helfta women as part of a community animated by a daily sense of Christ’s presence and by the rhythm of the liturgy, but also by quotidian preoccupations—the presence of illness and death, friendships with each other, and relations beyond the cloister—Professor Harrison places the women’s writings alongside their shared monastic and spiritual experience, bringing vividly to life their communal commitments, concerns, and sometimes annoyances. Brimming with fascinating observations about life at Helfta—from the nun who was excessively pleased with her golden bedspread, to the Christ-given power of Gertrude to hear confession, absolve, and assign penance—Thousands and Thousands of Lovers is a learned and delightful book that will be warmly welcomed by scholars and students concerned with questions relating to monastic community, spirituality, authorship, and gender."
Fiona Griffiths, Stanford University