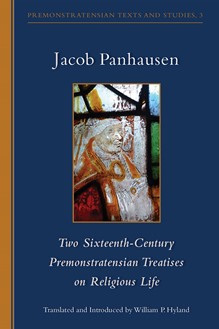 “How does one reform a German monastic community in the middle of the Lutheran Reformation? William Hyland’s insightful analysis of Jacob Panhausen and eloquent translation of two of his most important treatises brings to life the dynamics of monastic humanism and the efforts of a forgotten moderate who sought to bridge the growing divide between Catholic and Protestant.”
Howard Louthan, Professor of History, University of Minnesota

“Reformation scholars owe William Hyland a considerable debt for his fine edition and translation of two of Abbot Jacob Panhausen’s treatises on the religious life. Written at a time of great upheaval, Panhausen’s texts reveal his deep roots in medieval monastic spirituality and devotion as well as his connections to new Christocentric currents of humanist reform. As Hyland’s excellent introduction suggests they thus provide a rare and invaluable view into the theology and devotion of a leading reforming Abbot and Catholic irenic, serving as a reminder of a rich stream of monastic reform which continued even amid the struggles of Reformers and Counter-Reformers alike. Abbot Panhausen deserves to be widely read and Hyland’s volume is the perfect companion for anyone venturing into his world and that of sixteenth-century Premonstratensian reform more generally.”
Simon J. G. Burton, John Laing Senior Lecturer in Reformation History, School of Divinity, University of Edinburgh

“Hyland’s volume is a welcome and significant contribution to sixteenth-century religious studies. Premonstratensian monk and moderate Catholic reformer Jacob Panhausen (c. 1500-82) lived at a time of both profound religious change across Europe and existential crisis for his order. His writings radiate a spirit of charity, conversation, and gentle exhortation to find common ground between Catholic and Protestant views. Hyland’s introduction does an excellent job placing Panhausen and his works in their historical moment, and his sensitive, fluid translations will bring this lesser-known monastic leader the attention that he deserves.”
Nancy Bisaha, Professor, History Department, Director of Medieval and Renaissance Studies, Vassar College

"Aided by the excellent Introduction, readers might find this learned Norbertine is indeed worth reading."
Cistercian Studies Quarterly

“We are indebted to William P. Hyland for his translation of two texts that illuminate how a reform-minded abbot grounded in church traditions and embracing humanism was able to navigate a path to renewal during distressing times. Hyland’s introduction and translations demonstrate how, in the crucible of early modernity, the moderate reformer Jacob Panhausen tried to find a bridge between Catholics and Protestants—defending his heritage while embracing criticisms and calls for renewal.”
Christopher M. Bellitto, Professor of History, Kean University