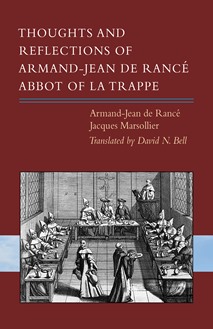 Armand-Jean de Rancé (1626–1700), the reforming abbot of la Trappe, was a prolific writer in a verbose age. Until he was in his thirties, he enjoyed the life of a young man about town, but then, after experiencing a dramatic conversion, he left the world forever for the silence and austerity of la Trappe. To read all that he wrote when he governed the abbey would take a great deal of time, but in 1703, three years after Rancé’s death, Jacques Marsollier, archdeacon of Uzèz and one of Rancé’s biographers, published a slender volume of selected Pensées et Reflexions, “Thoughts and Reflections,” by Rancé, which presents the essential ideas of the abbot in a condensed form. There are 259 Pensées, ranging in length from a couple of lines to about thirty. They are best dipped into, not read consecutively, for some will have more impact than others depending on the reader, the time, and the place.

David N. Bell is professor emeritus of religious studies at Memorial University (Newfoundland and Labrador) and a fellow of the Royal Society of Canada. His research encompasses Europe, Asia, and Egypt and range in time from the early years of Christianity to the twenty-first century. He has published nearly thirty books and one hundred articles. His main areas of interest are the history of medieval libraries, especially Cistercian libraries, medieval intellectual history, and the life and writings of Armand-Jean de Rancé, abbot of la Trappe.

"In this collection of spiritual sayings, now in its first English translation, Armand-Jean de Rancé reflects on spirituality as lived faith that realizes relationship with God through the obliteration of one's own will and self-love. The Pensées are brief and practical, yet deeply thoughtful. David N. Bell provides a thorough and engaging context for the spiritual background and contributions of the Pensées. It is fitting that Rancé, who would have once seemed an unlikely author of spiritual edification, and whose Pensées made their way through the world in several haphazard editions, now finds a home in a series dedicated to a variety of spiritual thought."
R. Jacob McDonie, Associate Professor of Literatures and Cultural Studies, University of Texas-Rio Grande Valley

"David Bell provides a fresh presentation of Rance with his excellent new translation of the 'Thoughts and Reflections' of the French reformer. A substantial introduction provides a clear context for what follows, and the reflections themselves are remarkably contemporary. They are powerfully succinct and rich in insight. This work presents the wisdom of Armand-Jean de Rance as absolutely relevant and significant for our own time. I am grateful for this superb book and hope it will attract a wide audience, especially among those in my own Order."
Sister Maria Rafael, OCSO, Tautra Mariakloster, Norway