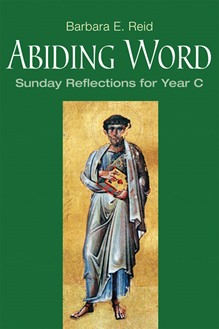 The church's cycle of scriptural readings for the liturgy offers believers an opportunity to immerse themselves in the word of God. It is a very real and tangible way of responding to the call of Jesus: "Remain in me, as I remain in you."

In Abiding Word, Barbara Reid, OP, takes the Sunday experience to every day with accessible weekly meditations on the Lectionary readings of the year. This collection of articles, which includes Scripture readings for Sundays and solemnities followed by reflections, allows readers to meditate on the connection between the sacred text and their daily lives. Living with the word day by day invites us into a closer relationship with Christ, the God who became flesh.

Barbara Reid is known for her contributions to The Word, a widely read column in America magazine. Abiding Word showcases some of her finest entries.

Barbara E. Reid, OP, is a Dominican Sister of Grand Rapids, Michigan. She holds a PhD in biblical studies from The Catholic University of America in Washington, DC, and is professor of New Testament and vice president and academic dean at Catholic Theological Union in Chicago. Her most recent books are Taking Up the Cross: New Testament Interpretations Through Latina and Feminist Eyes (Fortress Press, 2007), The Gospel According to Matthew (Liturgical Press, 2005), Parables for Preachers (3 volumes; Liturgical Press, 1999, 2000, 2001), and Choosing the Better Part? Women in the Gospel of Luke (Liturgical Press, 1996). She is general editor for Wisdom Commentary Series (forthcoming from Liturgical Press).

Barbara Reid demonstrates the gift of helping us find fresh insight in biblical passages quite and long-familiar, thanks to her life of scholarship and ministry, evident in these pages. She maintains a sense of urgency of the biblical storyline, posing questions for us but also offering insights from her own rich experience and that of people she has come to know deeply. Her language is fresh and clear, suggesting apt explanations for what might puzzle without quite foreclosing that we may see differently, thanks to her attentiveness to the depth of the text she reads with us.
Barbara Green, O.P., Professor of Biblical Studies, Dominican School of Philosophy and Theology at the Graduate Theological Union, Berkeley

An old proverb declares: One good turn deserves another. Simply put, if someone does you a favor, you return the goodness. In this volume of her Sunday reflections for Year C, Abiding Word, Dominican sister Barbara Reid graces us twice with goodness and returns to print a double portion of wisdom. What once appeared in a Jesuit periodical, now reappears in a single volume, again to inspire the reader to savor the living experience of the Word, the abiding presence of Christ. So do yourself a favor and return to these mediations over and over again.
Richard N. Fragomeni, Catholic Theological Union