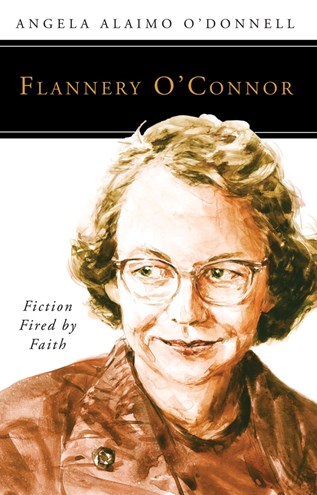 Flannery O'Connor: Fiction Fired by Faith tells the remarkable story of the gifted young woman who set out from her native Georgia to develop her talents as a writer and eventually succeeded in becoming one of the most accomplished fiction writers of the twentieth century. Struck with a fatal disease just as her career was blooming, O'Connor was forced to return to her rural home and to live an isolated life, far from the literary world she longed to be a part of.

In this insightful new biography, Angela Alaimo O'Donnell depicts O'Connor's passionate devotion to her vocation, despite her crippling illness, the rich interior life she lived through her reading and correspondence, and the development of her deep and abiding faith in the face of her own impending mortality. She also explores some of O'Connor's most beloved stories, detailing the ways in which her fiction served as a means for her to express her own doubts and limitations, along with the challenges and consolations of living a faithful life. O'Donnell's biography recounts the poignant story of America's preeminent Catholic writer and offers the reader a guide to her novels and stories so deeply informed by her Catholic faith.

Anyone would do well, and will be richly rewarded, by reading this beautifully written and insightful book about a great American Catholic writer. Don't miss it.
Baltimore Catholic Review

With evident commitment, Flannery O'Connor: Fiction Fired by Faith traces continuing negotiations between a courageous life of prayer and an exacting aesthetic pursuit. A rich, insightful introduction to the life of an author whose ardent Christianity forged a breathtakingly original narrative art.
Richard Giannone, author of Flannery O'Connor, Hermit Novelist

O'Donnell's chapters continue to juxtapose important moments in O'Connor's life-whether it be the friends she made, the texts she read, or the suffering she endured-with the important characters, settings, and symbolic imagery of her stories. O'Donnell manages to capture-clearly and concisely-the contours of O'Connor's Catholic imagination, not as something that narrows or reduces her life and work, but helps to open them up, and reveals a multi-dimensional artist at work.
Mark Bosco, SJ, American Catholic Studies

This insightful biography explores both the writings of O'Connor and the deep Catholic faith that inspired her many celebrated works of fiction.
U.S. Catholic

The O'Connor of this biography is entirely human, a woman with imperfections and limitations, but one who speaks with brilliance and warmth in O'Donnell's unprepossessing analysis. This inexpensive treasure is heartily recommended to academic libraries and all readers.
Catholic Library World

The strength of O'Donnell's book, what makes reading it as enjoyable as dropping in on a senior seminar led by an expert professor, is the deep literary exegesis of O'Connor's work. Many of us have read O'Connor's stories at some point, and probably a visceral impression of the haunted characters remains with us. But O'Donnell plumbs each short story and novel, examples its meanings and relates the themes to profound Christian ones. Drawing on O'Connor's letters, O'Donnell helps the reader understand O'Connor's vocation as an artist and her embrace of her own suffering as a way to draw closer to God.
Eileen Markey, America

Flannery O'Connor: Fiction Fired by Faith would serve as an excellent introduction to her life and writings for anyone who has heard about Flannery O'Connor and wondered what all the fuss-and fervor-is about.
Rose Pacatte, FSP, Author of Martin Sheen: Pilgrim on the Way

A succinct yet stunning account of O'Connor as both a brilliant storyteller and an incomparable intellectual. . . . The book's brevity is appropriate for a figure whose short stories have left a lasting mark on American Catholic consciousness.
Paul Monson, Theological Studies

Angela Alaimo O'Donnell has written a graceful, compelling biography of Flannery O'Connor whose fiction, she rightfully insists, constituted `the inestimable contribution [she] has made to American Catholic literature, thought, and culture.' A devout Catholic, O'Connor wrote with the same fervor about her faith than she did her craft. Seamlessly moving from the life events in O'Connor's pilgrimage-the places she wrote, the friends she made, the sufferings she endured-into the characters, settings, and symbols of her stories, O'Donnell brings readers into that enlightened nexus where O'Connor's Catholicism explains and extolls her art. O'Donnell's biography is a must read for anyone who wants to understand how and why O'Connor's fiction with its violence, suffering, and mystery emerges from her Roman Catholic faith and practice.
Philip C. Kolin, University of Southern Mississippi, Editor, The Southern Quarterly

A delightful and theologically insightful read. O'Donnell's gift of language, her knowledge of theology, and her own history of coming to understand O'Connor's work make this biography an excellent introduction to the life and work of Flannery O'Connor for new O'Connor readers, especially for non-Catholic ones.
Flannery O'Connor Review

How refreshing it is to read a biography of Flannery O'Connor that shows a deep understanding of her faith and treats it not as an idiosyncrasy to be dismissed as peripheral but as the primary motivator in her life and art. Professor O'Donnell has written an elegant and multi-dimensional portrayal of O'Connor as `a fellow Catholic-in-exile.' This is a must-read for anyone interested in coming to a full understanding of the ways in which O'Connor's faith was not just the background but the driving force behind her vision.
Jill Peláez Baumgaertner, Author of Flannery O'Connor: A Proper Scaring, Wheaton College

As someone who has read and taught Flannery O'Connor's fiction continually for the past half century, I found myself riveted by Angela Alaimo O'Donnell's compact and highly readable biography of one of the twentieth century's most deeply fascinating writers. What O'Donnell has managed to do here is to get at the heart of the mystery of O'Connor's novels, short stories, essays and letters and to reveal the by turns dark and luminous Catholic faith that sustained and transformed her work throughout her too-brief life. The truth is I could not put O'Donnell's book down until I had read straight through it from beginning to end. It's all here-the scholarship, the critical insights, a Catholic writer's trenchant understanding of another Catholic writer to remind us that the spirit of Merton, Dorothy Day, Walker Percy, and O'Connor herself is alive and well today.
Paul Mariani, Boston College

An excellent addition to the People of God series. This slim volume brings into focus the inner faith and growth of an author known primarily through her writings, both public and personal. It should be recommended reading as a companion piece for anyone who studies Flannery O'Connor's work.
Catholic Books Review