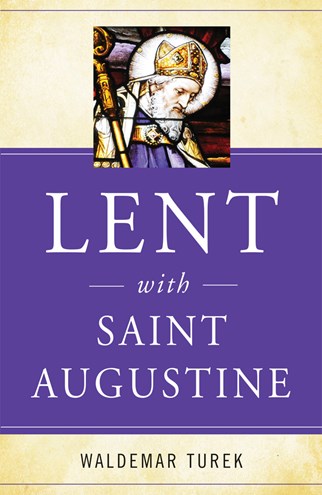 "Late have I loved you, Beauty so ancient and so new," prayed Saint Augustine. In a long and passionate search like a lost sheep, he delved in various philosophies. Finally, he discovered that God is near, within himself, in the depths of his soul. Augustine's Confessions immortalized the path of his conversion. They are a humble and sincere testimony of a sinner who experienced unconditional love.

In Lent with Saint Augustine, Waldemar Turek presents selected excerpts for each day of Lent, taken from this pearl of spirituality and literature, to which he adds a commentary on the liturgical readings. These spiritual reflections, nourished by the sources of faith serve as a prayerful aid. They allow the reader to touch the sacred, while celebrating the death and resurrection of Jesus.

Waldemar Turek, a priest of the Diocese of Plock (Poland), studied Christian and classical literature in Rome. He is an official of the Vatican Secretariat of State, and an adjunct professor of Latin at the Urbanianum Pontifical University. He has written a number of works on ancient classical writers and the Church Fathers. This is his first book published in English.

Pairing an excerpt from St. Augustine's Confessions with commentary on Lent's liturgical readings, Turek provides a prayerful accompaniment for walking readers through the death and resurrection of Jesus.
U.S. Catholic

These meditations on the Lenten liturgical readings illuminated by St. Augustine's adventure may help us to reset our lives and recognize the leading hand of God. The great Church Father's prayerful and grateful autobiography serves as a guide and inspiration for our own journey. The signs of grace accompany us, but do we take the time to notice them?
Wojciech Giertych, OP, Theologian of the Papal Household

Augustine of Hippo is the perfect guide through Lent. His brutal honesty became a confessio now rightly acknowledged as one of the greatest literary masterpieces. Father Turek shows us why by reading the Confessions precisely as they should be read: boldly and without the trappings of academic jargon. Anyone who spends a few minutes each day reading Fr. Turek's reflections will understand why Saint Augustine has become the "best friend" of so many Christians, including myself.
Msgr. Daniel B. Gallagher, papal latinist