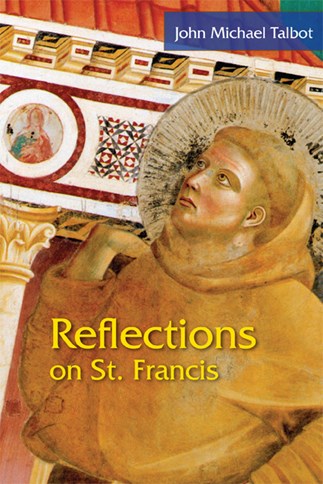 John Michael Talbot's Reflections on St. Francis offers readers an accessible entrance into the Rule and Testament of St. Francis of Assisi. Talbot's reflections shed light on Francis as a saint, a founder, and a reformer. Drawing on his own experience as the founder of The Brothers and Sisters of Charity at Little Portion Hermitage, an integrated monastic community of celibates, singles, and families, Talbot provides unique observations on how Francis’s life and the Franciscan tradition can be a source of inspiration for those of all states of life even today.

These meditations allow readers to contemplate the ways in which prayer, community, and simplicity can be integrated into their own lives while also giving readers Talbot's distinct interpretation of Francis’s work.

John Michael Talbot was born in Oklahoma City in 1954 and grew up in Indianapolis. He moved to Arkansas and founded The Brothers and Sisters of Charity at Little Portion Hermitage in 1982, which he still serves as Minister General. He was a founding artist of Sparrow records in 1976. After a successful career with Sparrow, in 1992 John Michael founded his own record label, Troubadour for the Lord, and is now recognized as Catholic music’s most popular artist. He has been married to Viola Talbot since 1989 and leads an active concert and teaching ministry from his home at Little Portion Hermitage Monastery.

John Michael Talbot reflects on St. Francis, his early mentor, in the light of his monastic experience at Little Portion Hermitage. He is readable and engaging. His commentary is based on wide reading, and he demonstrates a wise and balanced judgment learned in his years as a religious founder and superior. Along the way he relates the teaching of Francis to contemporary events and movements.
Abbot Jerome Kodell, OSB, Subiaco Abbey, Arkansas

The oldest representation of St. Francis, a fresco painted during his lifetime, is to be found at the place where St. Benedict began his monastic journey. Both saints, so different in many ways, wanted to search for God and to live their lives completely according to the Gospel. In our own day, this desire prompted John Michael Talbot to found a new kind of community nourished by the springs which he happily presents here. This book will be a great enrichment for all and will encourage them in their turn to allow their lives be shaped by the Gospel of Jesus Christ.
Notker Wolf, OSB, Abbot Primate of the Benedictine Order

John Michael Talbot has pondered deeply for many years the life and writings of St Francis. This book distills the wisdom of centuries old texts and applies them to contemporary life with his own wisdom, gleaned from life's experiences. It is a good read that will feed people's desires to reasonably apply to their own lives the lessons the Spirit led St. Francis to embrace.
Abbot Timothy Kelly, OSB, President, American-Cassinese Congregation of the Order of Saint Benedict