Alleluia for All That Is 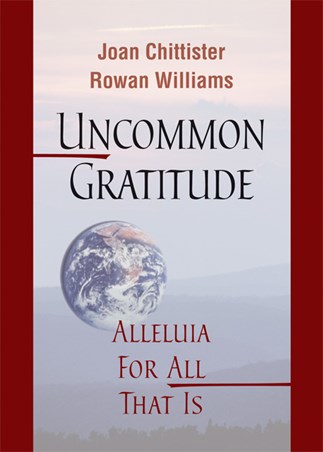 Archbishop of Canterbury Rowan Williams often says that, no matter what, the proper stance of the Christian in the world is one of gratitude. In this book, Sister Joan Chittister, OSB, and Archbishop Rowan Williams offer us a sweeping set of things and circumstances to be grateful for’things for which we can sing "alleluia," "praise and thanks be to God."

Some are things we naturally feel grateful for: God, peace, wealth, life, faith, and unity. But when these are set alongside other things we would never think to sing alleluia about’death, divisions, sufferings, and even sinners’we begin to see, as Joan Chittister says in her introduction, that "Life itself is an exercise in learning to sing ΓÇÿalleluia’ here in order to recognize the face of God hidden in the recesses of time. To deal with the meaning of ΓÇÿalleluia’ in life means to deal with moments that do not feel like 'alleluia moments' at all."

In this series of reflections it becomes clear that singing "alleluia" is not a way to escape reality but receptivity to another kind of reality beyond the immediate and the delusional, of helping us understand what is now and what is to come.

Joan Chittister, OSB, is a Benedictine nun and international lecturer who has been a leading voice in spirituality for more than thirty years. She has authored forty books, including her most recent, The Liturgical Year: The Spiraling Adventure of the Spiritual Life, published by Thomas Nelson.

Rowan Williams, Archbishop of Canterbury, is acknowledged internationally as an outstanding theological writer, scholar, and teacher. He has been involved in many theological, ecumenical, and educational commissions and has written extensively across a wide range of fields of professional study ΓÇô philosophy, theology, spirituality, and religious aesthetics. He has also written on moral, ethical, and social topics and, since becoming archbishop, has focused more intently on contemporary cultural and interfaith issues.

Uncommon Gratitude: Allelluia for All That Is comes from the Archbishop of Canterbury who maintains the proper stance in the Christian world is one of gratitude. This surveys things to be grateful for--and reflects on how singing `alleluia' opens the door to other realities and truths. A fine inspirational reflection any Christian collection will welcome.
The Midwest Book Review

In Uncommon Gratitude two fascinating story-tellers tackle head-on the question, `What is life all about?' From the 2004 Tsunami to the Seven Deadly Sins, and from world-shaking events to daily haps and mishaps. When, how, and why can we shout `Alleluia!'-become Alleluia-in the midst of it all, in spite of it all? Before I put this page-turner down, I had wept and smiled and shouted `Alleluia!' in my heart in deep gratitude for this uncommon book. Book circles and study groups will find it particularly useful.
Brother David Steindl-Rast, OSB
Author, lecturer, co-founder of www.gratefulness.org

One finishes this book with renewed gratitude-for faith and doubt, for all that is, for two wise spiritual teachers who remind us that God is present not just in the peak experiences, but in the hidden depths of our everyday life.
Robert Ellsberg
Author of The Saints' Guide to Happiness

Often I found myself reading sentences and paragraphs over again-and aloud-for the sheer pleasure of the flow of thought and the sound of the words.. Chittister and Williams give ample cause, motivation, and desire to sing out `Alleluia,' encouraging us to lift up our minds, hearts, and spirits at every turn of life's journey.
James A. Wallace, CSsR, New Theology Review

A soul stretching book by two contemporary prophets. Alleluia for Joan Chittister and Rowan Williams for this inspiring and timely message of hope in the midst of so much fear and violence. A faith filled and prophetic perspective on the dark and hurting spaces in our world and lives. We are both invited and challenged to pick up our pieces, dry our tears, shake ourselves down, and continue the journey with renewed hope and joy. Alleluia indeed.
Edwina Gateley
Poet, writer, international speaker, and women's advocate

The book is a walk through the Paschal Mystery. It takes everyday life experiences and weaves together death and disappointment, insight and growth, sin and liberation. It is a book of Alleluias for the marvelous richness of life.
The Living Church

Christians always need to ponder the whole of life, `all that is.' While the book offers a collection of spiritual remarks toward that goal rather than an overarching Christian philosophy, the individual chapters, especially those by Williams, give valuable insights to Christians as they attempt to face the most profound challenges with gratitude.
Anglican and Episcopal History

In her examination of darkness, death, the future, and God, Chittister keeps her heart open and her eyes on the prize of gratitude which enables us to bear all things and still lift our souls in praise of the Creator.
Spirituality & Practice