Sunday Reflections for Year B 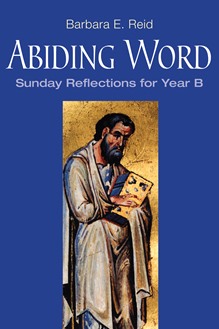 Jesus' disciples are given this command in John's gospel, and it is a command that extends to every one of his followers, including us. We deepen this mutual indwelling-we in Christ and Christ in us-each Sunday through the word and at the table.

In Abiding Word, Barbara Reid, OP, takes the Sunday experience to every day with accessible weekly meditations on the lectionary readings of year. This collection of articles, which includes Scripture readings for Sundays and solemnities followed by reflections, allows readers to meditate on the connection between the sacred text and their daily lives. Living with the word day by day invites us into a closer relationship with Christ, the God who became flesh.

Barbara Reid is known for her contributions to "The Word," a widely read column in America magazine. Abiding Wordshowcases some of her finest entries.

Barbara Reid, OP, is a Dominican Sister of Grand Rapids, Michigan. She holds a PhD in biblical studies from The Catholic University of America in Washington DC and is professor of New Testament and vice president and academic dean at Catholic Theological Union in Chicago. Her most recent books are Taking Up the Cross: New Testament Interpretations Through Latina and Feminist Eyes (Fortress Press, 2007), The Gospel According to Matthew (Liturgical Press, 2005), Parables for Preachers (3 volumes; Liturgical Press, 1999, 2000, 2001), Choosing the Better Part? Women in the Gospel of Luke (Liturgical Press, 1996). She has led many of CTU's Israel Study Programs and Retreats. She is general editor for Wisdom Commentary Series (forthcoming from Liturgical Press).

This rich volume draws the biblical text into the hearts of its readers and invites them to ponder, wonder, listen, and be surprised by the Spirit in celebration of Christ's abiding love that rests in the midst of all people, all creation. With clarity and graced imagination, Barbara Reid has given us a concise yet insightful collection of reflections on the Sunday Readings for Year B. Solid in its scholarship and possessing a practical awareness of daily life with its challenges and blessings, this volume links the biblical text to the text of life, thereby making ancient stories and teachings wondrously new and ever refreshing.
Carol J. Dempsey, OP, Professor of Theology (Biblical Studies), University of Portland, OR

Rich fare indeed! This volume offers a rare combination of the fruits of biblical and liturgical scholarship and keen attention to human experience and the signs of the times. Providing striking new insights into the Sunday Readings for Year B, Abiding Word is an invaluable resource for preachers, pastors, catechists, spiritual directors, and all who seek to share the Word of God with others. For those who long to make the Word of God their home, but aren't sure how to begin, this invitation to dwell in the Word offers wise and practical suggestions for how to enter into a contemplative reading of biblical texts.
Mary Catherine Hilkert, O.P., Professor of Theology, University of Notre Dame

Along with her scholarly acumen, Barbara Reid, OP, has a wonderful knack for interpreting the Scriptures in a way that is attractive and comprehensible to those who may have no technical background at all in biblical exegesis. You don't have to take my word for it-it is apparent on every page of this book.
Donald Senior, CP, The Bible Today

From both pulpit and pew, good preaching invites reflection on daily life and the life of the soul, as illuminated by the images and rituals of scripture and liturgy, and in constant dialogue with family, community, nature, and social context. Barbara E. Reid's love of literature and passion for justice combine with a deep knowledge of scripture to inspire weekly insight for listeners called to abide in the living Word of God as found in the Roman Catholic Lectionary for Mass.
Gregory Heille, O.P., Professor of Homiletics, Aquinas Institute of Theology, St. Louis