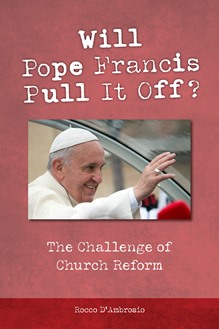 Will Pope Francis Pull It Off?

Pope Francis has made no secret of the fact that he seeks to reform the Catholic Church, especially the institutional components by which it is guided and governed. Standing in his way are institutional inertia, simplistic ideologies, scandals, and the resistance of some who will not readily relinquish power. Can he pull it off?

In this smart and thoughtful book, priest-sociologist Rocco D'Ambrosio carefully considers the personality, convictions, and gifts the pope brings to the task. He explores the hurdles Francis faces, the tools at his disposal, and his prospects for success. The result is an institutional analysis of the Catholic Church in the Bergoglio era that promises rich, new insights and plenty of food for thought to every reader.

Rocco D'Ambrosio is a lecturer in political philosophy and political ethics at the Pontifical Gregorian University. A diocesan priest, he is also director of Cercasi un Fine ("Seeking a Goal"), an Italian organization for people of various religions and cultures united in seeking a more just, peaceful, and beautiful society. D'Ambrosio received his doctorate in social sciences from the Gregorian in 1995. He is the author of many books (published in Italian) on political science, institutional culture, and Catholic social teaching. This is his first book to be published in English.

"D'Ambrosio's analysis, by exploring the insights of the human sciences, is enriched by angles of consideration that an exclusively theological vision would be unable to offer. The result is a sharp and coherent study that, like Francis's own style, calls us to mercy but does not justify or tolerate unethical or harmful behavior. To this end, D'Ambrosio's style is transparent and simple, rooted in the conviction that no change is possible without revealing the ugliness and its mechanisms hidden within the reality of the church."
Emilia Palladino, Civiltà Cattolica


"Timely and well crafted, drawing heavily on the primary sources of the Pope's writings and public statements. The book will certainly find a place on my shelf an in my classroom."
The Way


"In order to understand Pope Francis's pontificate we need theological analysis as well as an analysis of Francis's approach to Church reform from an institutional-systemic point of view. This book by D'Ambrosio offers a very necessary insider look at the politics of Francis's reform and, most important, of the opposition to Francis."
Dr. Massimo Faggioli, Professor of Historical Theology, Villanova University


"Pope Francis has made reform of the Church a signature of his pontificate, and Rocco D'Ambrosio has provided adept institutional analysis to shed light on the momentum and challenges inherent in such a bold pursuit. All who care deeply about the outcome and want to understand the context, commitment, and countervailing forces at hand would do well to read this book."
Kerry Alys Robinson, Founding Executive Director and Global Ambassador, Leadership Roundtable


"In this quick read of some one hundred pages, priest-sociologist Rocco D'Ambrosio prompts our discussion about the challenge of the church reform championed by the Pontificate of Pope Francis as it steers a new course, away from the Church's traditional anchor points within Europe; new waters run deep and the cross-currents are hard to navigate. D'Ambrosio brings focus to Francis the person, Francis the reformer, and Francis the pope. The writer's narrative then moves to appraise the general backdrop of the church's institutional components—their rationale and foundation—against which Francis is now pitching his energies."
Jay Kettle-Williams, editor of diocesan magazine of Portsmouth (UK)