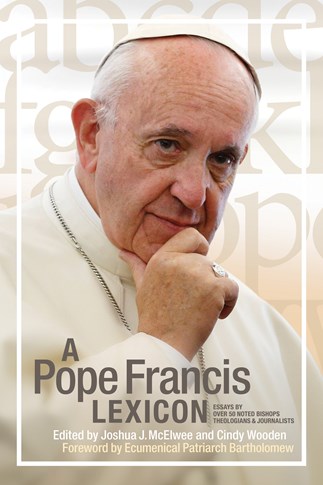 There's an amazingly interesting book on the store shelves now. It's all about Pope Francis and the words he uses in his writings, in his talks, and in his everyday conversations with priests, heads of state and the ordinary folks he comes in contact with each day. If you have every found yourself uncertain about what Pope Francis was saying and wanted to better understand him and the direction in which is leading our Church, the help you're seeking can be found in the pages of this book. How fitting that it is being published just as we celebrate the fifth anniversary of Pope Francis' election.
Father Charles Fuld, The Southern Cross, Diocese of San Diego

What I found most delightful about A Pope Francis Lexicon is that from these individual essays I learned not only about Francis' characteristic use of language but the essayist's own "take" on what the Pope has to say. I strongly recommend the work, not only for those who already admire Pope Francis' thought and action but perhaps especially for those who are being invited to conversion of heart and mind.
J. Michael Joncas, Pastoral Music

This accessible, inspiring, and often entertaining collection is an invaluable resource for anyone seeking to understand the fullness and richness of Pope Francis' thought. I finished it inspired to get out into the field hospital and embrace our world with hope.
US Catholic

This new book is a must read in 2018! A real gem and key lexicon for understanding Pope Francis!
Fr. Thomas Rosica, CSB, CEO, Salt and Light Catholic Media Foundation

Joshua J. McElwee and Cindy Wooden have brought together an outstanding collection of writings on Pope Francis' leadership from major figures in the Church and wider Catholic life. A Pope Francis Lexicon is a valuable guide to the words and ideas that form the foundation of Francis' papacy. It rightly belongs on the shelf of anyone interested in the direction of the Catholic Church today.
E.J. Dionne Jr., co-author of One Nation After Trump and senior fellow at the Brookings Institution

This brilliant collection fizzes with the tension and tumult of this most provocative and enigmatic of papacies. Francis-the top-down decentralizer, the champion of the peripheries who draws the world's attention to the personality at the center, the blunt speaker who leaves exasperated critics demanding tidiness and clarity-has triggered a creative commotion. No one writer has ever quite captured it; McElwee and Wooden's kaleidoscope comes close.
Brendan Walsh, editor of London-based weekly Catholic journal The Tablet

A Pope Francis Lexicon is a helpful addition to the ever-expanding literature on Pope Francis. This collection will no doubt be greeted with gratitude by those desiring personal growth through reflection on the Pope's words and actions, especially his determination to build bridges, foster receptive dialogue and multiply opportunities for encounter.
Cardinal Pietro Parolin, Vatican Secretary of State