A Holy Yet Sinful Church 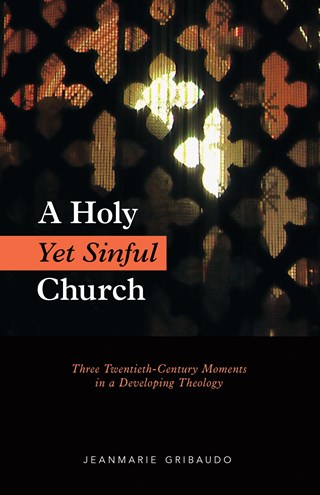 This text examines three key moments in the developing theology of the church's holiness and sinfulness in the twentieth century: the ressourcement movement of the 1930s to the 1950s, the Second Vatican Council (1962-65), and the pontificate of John Paul II (1978-2005).

The aim of this text is to make accessible the works of Emile Mersch, Henri de Lubac, Hans Urs von Balthasar, Yves Congar, Karl Rahner, and Charles Journet that discuss the holiness and sinfulness of the church and to demonstrate how these works were influential in composing the Dogmatic Constitution on the Church, Lumen Gentium. The author then considers how this developing theology is put into practice in Pope John Paul II's millennial program, which centers on admitting that the Church in its members has sinned and needs to seek forgiveness.

Sister Jeanmarie Gribaudo, a Sister of St. Joseph of Boston, holds a doctorate of sacred theology from Boston College. She has extensive experience working with young people, having served for over ten years as Mayor Thomas Menino's youth advisor. She has worked in higher education administration and has taught courses at Stonehill College, Fairfield University, and Sacred Heart University. Currently, she is an adjunct faculty member at Merrimack College in North Andover and serves as a reviewer of catechetical texts for the United States Conference of Catholic Bishops.

Interesting questions were raised by John Paul II's efforts to cleanse the Church's conscience in preparation for the Great Jubilee of 2000 and to advance the New Evangelization. That discussion continues here.
George Weigel, Distinguished Senior Fellow, Ethics and Public Policy Center

Exhaustively researched and written in a clear and comprehensive style, A Holy Yet Sinful Church captures an important feature of John Paul's efforts to move the Church forward in the twenty-first century. Informative and challenging, this monograph brings to light an important focus for contemporary Catholicism.
Richard Gribble, CSC, Stonehill College

Gribuado's A Holy Yet Sinful Church is both timely and provocative. Timely in that it plumbs the preconciliar sources that informed the writing of Lumen Gentium and explores the decades of interpretation and implementation that followed. It is provocative because now, in the era of Pope Francis, we once again are struggling with the question, `What does the Holy Spirit call the church to become?' Gribaudo's work is theologically mature, historically rich, and pastorally sensitive, and it is written in a compelling fashion. She probes the history of the church's identity as both holy and sinful and presents this narrative like a historical drama with a cast of intriguing characters. This is sure to be a standard text in ecclesiology and church history. It is engaging for graduate students, mature undergraduates, and intellectually curious lay readers.
Mark J. Allman, PhD Professor and Chair, Religious and Theologic al Studies Department Merrimack College Co-editor, Journal of the Society of Christian Ethics

Gribaudo has provided a foundational genealogy of current teaching on ecclesial holiness and sinfulness in the documents of Vatican II and in the words and actions of John Paul II. This work is rooted in a careful, insightful analysis of the origins of that teaching in preconciliar ressourcement theologians such as Mersch and de Lubac, and midcentury thinkers such as Congar and Rahner. Gribaudo then collects and analyzes ecclesial holiness and sinfulness in Lumen Gentium and in the papacy of John Paul II. No other work has gathered and analyzed such a wide variety of twentieth-century sources on this topic in such a comprehensive, observant way. Gribaudo's book is valuable both as a historical study of the development of ecclesiology in this period and as an unsurpassed point of departure for all future systematic thought on the holiness and sinfulness of the Church.
Brian P. Flanagan, Assistant Professor of Theol ogy, Marymount University

"A Holy Yet Sinful Church is certainly a demanding read, but is also extremely well‐written, and the author lightens the load considerably by bringing to vibrant life the different writers she is interrogating. She also succeeds fully in drawing together her different ‘moments’ with both conviction and aplomb."
Richard Clarke, Armagh, The Furrow

In A Holy Yet Sinful Church, Sr. Jeanmarie Gribaudo offers a scholarly yet accessible account of the claim that the Church has always been understood as both holy and sinful. Exemplifying how historical scholarship can temper and broaden theological perspective, Gribaudo focuses in particular on the appearance of these themes in preconciliar thought as well as Vatican II's Lumen Gentium, as these prepared the ground for Pope John Paul II's remarkable litany of repentance for the Church's faults in March 2000. Her work offers a timely lesson about the nature of the Church as both holy and sinful, which, taken to heart, is a lesson for the communal dimension of theological anthropology as well.
Nancy Dallavalle, Fairfield University, Vice President for Mission and Identity, Associate Professor of Religious Studies

The Creed calls the Church holy. Can the Church also be called sinful? The author presents a century's worth of reflection on these points-preconciliar theologians, Vatican II, John Paul II-and on the question, sinful Church or Church of sinners? This careful study clarifies and illumines a century of complex reflection, a century that might be called, in theology, the century of ecclesiology, with Vatican I in the background and Lumen Gentium on the distant horizon. The author's conclusion is the right one: the matter is not concluded. A book recommended enthusiastically.
Joseph T. Lienhard, SJ, Fordham University

In an ecclesial era of searching for ways forward for a new evangelization while constantly being confronted with our own failures to model the faith, new demands for a profound theology of the Church have confronted us. Sr. Jeanmarie Gribaudo has provided just such a careful examination of the variety of influences that shaped the Church's self-understanding after Vatican II, which allows us to profess once again a new faith in a Church that is at once sinful and holy, mediating salvific grace for a people as much in need of it as ever.
Christopher Collins, SJ, Director of the Catholic Studies Program, Saint Louis University

"The book gives a rich theological understanding of the nature of the Church. Underpinned by the theology of the six pre-conciliar theologians and Vatican II, the author highlights how the holiness and sinfulness of the Church are two sides of the same coin, recognizing the indefectible and the imperfect holiness of the Church which come from her eschatological character."
Grace & Truth