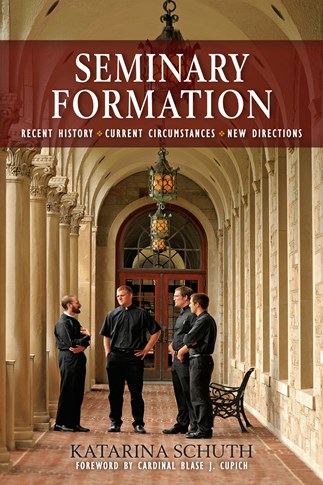 The past thirty years have witnessed tremendous societal and ecclesial changes that continue to inform ministry education in the 21st century. In Seminary Formation, Katarina Schuth, OSF, examines the many aspects of theologate-level schools including their structures and missions, organization and leadership, student enrollment, backgrounds of both seminarians and lay students, and the evolution and development of degree programs, including human and spiritual, intellectual and pastoral formation. Seminary Formation also helpfully includes substantial commentaries on Schuth's research by Ronald Rolheiser, Thomas Walters, Leon M. Hutton, Barbara Reid, and Peter Vaccari.

An exploration of the changes in seminaries and schools of theology, with statistical analysis, from 1985 to the present, Seminary Formation anticipates the challenges ahead and considers new directions for the future.

Katarina Schuth, OSF, PhD, holds the Endowed Chair for the Social Scientific Study of Religion at The Saint Paul Seminary School of Divinity. Her other books include Priestly Ministry in Multiple Parishes; Educating Leaders for Ministry: Issues and Responses (with Victor J. Klimoski and Kevin J. O'Neil; Seminaries, Theologates, and the Future of Church Ministry: An Analysis of Trends and Transitions; and Reason for the Hope: The Futures of Roman Catholic Theologates.

Katarina Schuth has produced another excellent study on seminary formation in the United States and its implications for the future. Analyzing thirty years of seminary catalogs for changes in seminary organization, administration, degree programs, and enrollment, she describes how priestly formation has evolved since 1985 in response to several Vatican documents and an Apostolic Visitation as well as five U.S. editions of the Program of Priestly Formation. Supplementing this research with surveys and interviews of the leaders of these theologates, the book is a detailed, balanced, and well-rounded analysis of how seminaries have read the signs of the times and adapted to meet the challenges of priestly formation for an increasingly diverse and complicated Church.
Mary L. Gautier, Senior Research Associate, Center for Applied Research in the Apostolate (CARA)


Few scholars rival Katarina Schuth's knowledge of Catholic seminary formation and its changing patterns over the past fifty years. Schuth has produced an informative work that puts in perspective the challenges and needs of seminary formation in the coming decades.
Horizons: The Journal of the College Theology Society


No one is better equipped to conduct this thorough appraisal of seminary formation in the United States than Sr. Katarina Schuth, OSF. Surveying over thirty years of history since her last major study, Reason for the Hope, she brings her sure command of the data, strong analytical skill, and eminent good sense to bear on the status of seminary education in the evolving circumstances of today's church. Her conclusions and recommendations-along with the commentaries of some colleagues included in this book-offer wisdom to all those concerned about the quality and effectiveness of the Catholic priesthood, today and into the future.
Rev. Donald Senior, C.P., Chancellor and President Emeritus of Catholic Theological Union, Chicago, Illinois


Sr. Katarina Schuth, OSF, is arguably the most knowledgeable person today regarding the state of Roman Catholic theological/ministerial education in the United States. . . . The U.S. Church owes a debt of gratitude to [her] for this comprehensive and insightful study on Roman Catholic seminaries and schools of theology and ministry. Bishops and all engaged in the formation of seminarians and lay ministers need to read this book.
Worship


A valuable guide to a venerable system that is overdue for fresh and courageous approaches.
Commonweal


Schuth has identified concerns for the future, including multi-cultural approaches to ministry. She also recognizes consistent spiritual formation as an important factor in ministry.
Catholic Library World


Sr. Katarina is an incredible woman of faith, a dedicated researcher and a gifted scholar who gives great witness to her love for the Church and the formation of men for the priesthood. This new research is erudite yet approachable. Her work will continue to challenge and inspire the conversation among those of us intimately involved in seminary formation. The insights offered and the questions proposed by Sr. Katarina will indeed aid seminary formation as it moves into the future. The five commentaries at the end of the book also offer thought provoking reflections that will be of benefit to seminaries in their mission to meet the spiritual needs of the church in the formation of her future ministers.
Msgr. Ross Shecterle, President/Rector, Sacred Heart Seminary/School of Theology, Hales Corners, Wisconsin