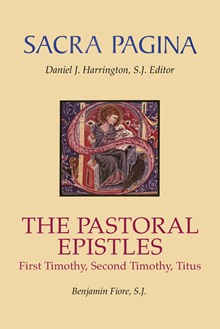 First and Second Timothy and Titus have for many years borne the collective title The Pastoral Epistles. Both their style and their content make it difficult to locate them within the corpus of Pauline letters, and recent scholarship most often considers them pseudonymous, works that imitate Paul's letters but apply the apostle's teaching to the concerns of a later time, two or more decades after Paul's death.

In this commentary Benjamin Fiore, S.J., places the Pastorals in their historical and literary context. The reader will find here a solid introduction to parallel literary forms in Latin and Greek literature and particular descriptions of the way in which these documents use ancient rhetorical forms to achieve their paraenetic and hortatory purpose. Drawing on his parish experience as well as his academic training, Fiore also provides reflections on the contemporary pastoral application of these books, giving readers a renewed appreciation for the pastoral label these epistles bear.

[R]eaders will find this commentary most helpful for matters of exegesis, ecclesiology, and biblical as well as Greco-Roman parallels, and least helpful for issues related to the theology and place of the Pastoral Epistles in the development of the early church.
The Catholic Biblical Quarterly

[A]n excellent commentary on the Pastoral Epistles, I would recommend it for courses in Paul as well as the history of the early church.
Catholic Books Review