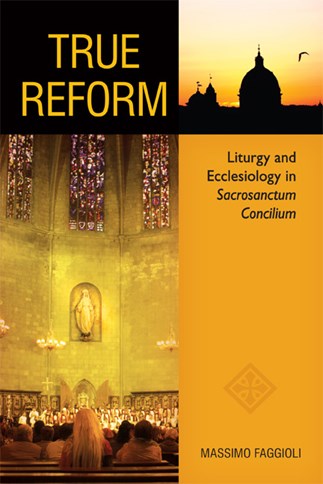 In True Reform, Faggioli takes Sacrosanctum Concilium as a hermeneutical key of the council. He offers a thorough reflection on the relationship between the liturgical constitution and the whole achievement of Vatican II and argues that the interconnections between the two must emerge if we want to understand the impact of the council on global Catholicism.

This is a valuable, even groundbreaking, study for the interpretation of Vatican II. Faggioli succeeds in showing how the liturgy constitution and the subsequent liturgical reform are essential for the understanding and implementation of the council. It should be required reading for ecclesiologists and historians of the contemporary church as well as for students of the liturgy-perhaps even for members of the Roman Curia.
John F. Baldovin, SJ, Professor of Historical and Liturgical Theology, Boston College

True Reform is a thoroughly documented analysis of Sacrosanctum Concilium and its reception by the Second Vatican Council itself. The document's connection with the ecclesiology of the council emerges fully. In this way, the book provides a deep understanding of the council in its liturgical dimension and its unavoidable call to reform the church in order to be more faithful to the Gospel of Jesus Christ.
Fr. Enzo Bianchi, Founder and prior of the ecumenical monastic Community of Bose