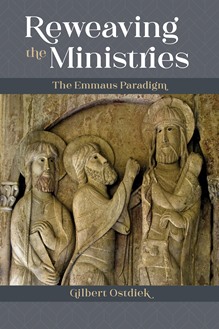 As the Emmaus story unfolds it moves from catechesis to Eucharist to mission. It is a promising paradigm for the process of reweaving the present array of parish ministries into an integrated pastoral practice.

Gilbert Ostdiek, OFM, invites those engaged in ministry and those preparing for it to think of their own ministry as part of a larger pastoral tapestry. He also extends the Emmaus paradigm to pastoral leaders who have the responsibility to integrate and coordinate the practice of ministry at parish and diocesan levels.

Reweaving the Ministries invites all who are involved in ministry to become ever more fully, in St. Paul’s description, co-workers with one another and co-workers with God in the care of God’s people.

Gilbert Ostdiek, OFM, is professor of liturgy at Catholic Theological Union, an ordained presbyter, and a member of the Franciscan Province of the Sacred Heart. He is the author of numerous publications including Mystagogy of the Eucharist: A Resource for Faith Formation (Liturgical Press). He has received a Festschrift, Finding Voice to Give God Praise: Essays in the Many Languages of the Liturgy, edited by Kathleen Hughes (Liturgical Press).