Mercy and the Rule of Law

A Theological Interpretation of Amoris Laetitia 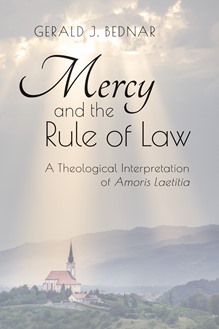 Given the Catholic Church’s complex history concerning divorce and remarriage, it’s not surprising that the promulgation of Amoris Laetitia in 2016 caused such a stir among the laity, the press, some theologians, and even some bishops.

This book endeavors to introduce concepts and contexts that will help all these groups understand the document in a new light, explaining what the rule of law actually means, and hopefully open a door to further discussion among theologians and clergy whose critical comments have so often missed the point of Francis’s apostolic exhortation.

Gerald J. Bednar holds a doctorate in systematic theology from Fordham University (1990), a master’s degree in government from Georgetown University (1971) and a law degree from the University of Notre Dame (1974). After having practiced law in Washington, DC, for five years, he entered Saint Mary Seminary in Cleveland, where he earned a master of divinity degree in 1983. Fr. Bednar taught at Saint Mary Seminary for thirty years before his retirement in 2021.