Jesus in the Hands of Buddha

The Life and Legacy of Shigeto Vincent Oshida, OP 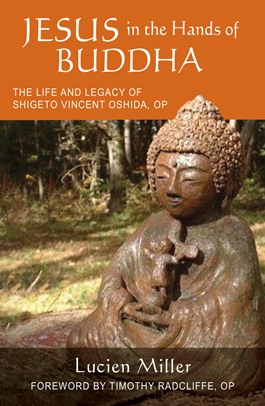 Jesus in the Hands of Buddha is an enthralling memoir of Father Shigeto Oshida, a man who was at once a Japanese Zen Buddhist master and a Catholic Dominican priest. Guided by the hand of God and the Buddha dharma, he became the founder and director of the Takamori Hermitage in the Japanese Alps, a place where pilgrims have been drawn for decades. He was a unique pioneer in the encounter between religions East to West who felt he was led to the Catholic faith and the priesthood by a trick of God. Overwhelmed by the weight of European-styled Catholic culture inundating the Catholic Church in Japan, Oshida received permission from his superiors to strike out on his own and listen to the voice of God while remaining a Dominican priest and Zen master, thus becoming both hermit and healer in a community of pilgrims—the sick, the poor, and the disenchanted from around the world.

Through this encounter with Shigeto Oshida’s life and works, and awakening to his oneness of being a Catholic priest and Buddhist monk, readers are invited to enter their own journey to Jesus in the hands of Buddha. The unifying thread of this new horizon is grace—the unmitigated gift of divine love that permeates individuals, events, and locations and makes them holy.

Lucien Miller attended the University of California, Berkeley, where he earned his BA, MA, and PhD in comparative literature and with his wife Bonnie raised their three children. During graduate school he studied Chinese language and literature at Berkeley, the University of Hawaii’s East-West Center, and the Stanford Chinese language center in Taiwan. He spent six sabbaticals in Taiwan, Japan, China, Hong Kong, and India. While teaching comparative literature and Chinese at the University of Massachusetts, Amherst, Lucien felt called to be a Roman Catholic deacon and he served in that capacity and as spiritual director at the Newman Catholic Student Center for thirty-five years.