Living the Justice of the Triune God 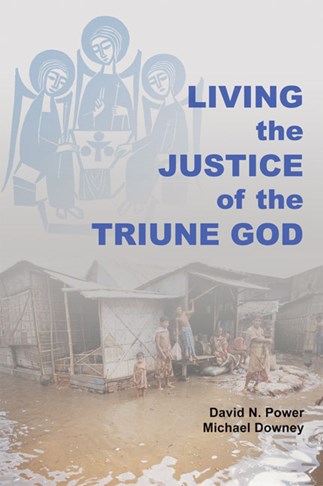 This groundbreaking book is distinctive for the explicit attention it gives to the communal, intersubjective, cultural, and linguistic embodiment of the workings of God in the world. It emphasizes not simply acting justly but living with, in, and from the justice of the triune God by which we are justified. Finally, it offers an important sacramental and liturgical grounding to the Christian understanding of both justice and the triune God.

David N. Power and Michael Downey make clear to contemporary believers why a spiritual and sacramental life that is ordered by its trinitarian orientation must include the desire for justice. In short, it is an ethic of social justice that springs from contemplation of the Divine Trinity in the world.

David N. Power, OMI, a native of Dublin, Ireland, is professor emeritus at The Catholic University of America, Washington, DC. He previously taught theology in Ireland and Rome and has lectured in Australia, Canada, the Philippines, Tahiti, and South Africa. He is currently in Lusaka, Zambia, in the OMI formation community. He is the author many books of theology, including Mission, Ministry, Order (New York & London: Continuum, 2008).

Since completing his doctorate under the direction of David Power in 1982, Michael Downey has served as professor of theology and spirituality at universities and seminaries in the United States. His abiding theological commitment to those who are wounded and marginalized has brought him to serve the church most in need through lectures, conferences, and retreats in different parts of the world. From 1997-2011 he served as the Cardinal's Theologian, Archdiocese of Los Angeles. He is currently Diocesan Theologian in San Bernardino, CA.

With enviable clarity and accessibility, this deeply informed and considered work provides a profound treatment of the living heart of Christian vocation in service of the gospel of justice. In central focus is our participation in the Triune life of God-the communion of divine love in action-and the character of Christian life as sacrament of this. This is theology that feeds the soul, informs the mind and inspires to action all at once.
Prof. Paul D. Murray, Professor of Systematic Theology and Director of the Centre for Catholic Studies, Durham University, UK

[Power and Downey's] work constitutes a genuine breakthrough in both a theology of the Trinity and a reflection on its relation to liturgy and justice. This book deserves close reading by anyone interested in what the Christian narrative has to offer our diverse and suffering world.
Catherine Vincie, Aquinas Institute of Theology, St. Louis, MO

David Power and Michael Downey offer a fresh vision of the justice of the triune God to a world anguished by deprivation, division, ecological degradation, and the loss of a sense of purpose and direction. Their praxis theology of the life-giving Word and love of God made tangible in the particularities of cosmic and human history speaks to the crises and suffering of our time. They invite us to a Eucharistic table in which wounded and broken bodies are remembered and restored to communion in the heart of the divine life that impels us to live justly in the world.
Elizabeth Groppe, Associate Professor of Theology, Xavier University

As a teacher of theology at the undergraduate level, I appreciate clear treatments of Christian doctrine. David Power and Michael Downey have written such a work on the Trinity. They have not only traced the history of diverse treatments of the Trinity but have incorporated contemporary intercultural and intercontintental insights in their interpretation of this central Christian doctrine. Those who profess faith in the Triune God and strive to live a just life in a multicultural context will heartily welcome this fantastic contribution to the ongoing conversation on the Trinity.
Linh Hoang, OFM, Assistant Professor of Religious Studies, Siena College

In this book, David Power and Michael Downey . . . are up-front about the fact that they are not in the business of offering speculative reflections on the inner life of the Trinity or a reasonable account of why Christians thing of God as Trinity. . . . Instead, they . . . show how trinitarian language can both make sense of and inspire a Christian praxis in which love and justice converge. Given that the question has shifted from "Why God?" to "Why religion?," . . . [they succeed] in showing how the traditional doctrine of the Trinity is not irrelevant to praxis, but emerges from and continually points to the presencing of God's love and justice in the world. It is a must-read on all levels—by undergraduates, graduate students, laity, and theologians.
Aristotle Papanikolaou, Fordham University, Horizons: The Journal of the College Theology Society

[Living the Justice of the Triune God offers] an impressive framework for a praxis theology of justice rooted deeply in the best of classical and contemporary Trinitarian thought. Their method represents a new and fruitful approach to the retrieval of a doctrine that has for too long been obscured by the fog of abstract speculation.
Michael Hryniuk, Spirituality

David Power and Michael Downey . . . show how Trinitarian language can both make sense of and inspire a Christian praxis in which love and justice converge. Given that the questions has shifted from "Why God?" to "Why religion?," this book is a timely and important contribution to Trinitarian theology. . . . Power and Downey have succeeded in showing how the traditional doctrine of the Trinity is not irrelevant to praxis, but emerges from and continually points to the presencing of God's love and justice in the world. It is a must-read on all levels—by undergraduates, graduate students, laity, and theologians.
Aristotle Papanikolaou, Fordham University, Horizons