The Word Made Love 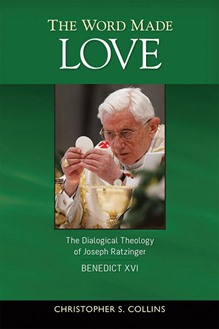 From scholarly monographs to papal homilies, Joseph Ratzinger has insisted consistently over decades that Christianity is not a set of ideas to believe or, even less, moral laws to follow. Rather, Christianity is about a person and our encounter with that person.

In The Word Made Love, Christopher Collins identifies in the structure of Ratzinger's thought the presentation of God as one who speaks and who ultimately speaks Himself in the person of Jesus Christ. Humanity's posture before God is one of hearing and responding. For Ratzinger, then, dialogue is the basic structure of all reality, and the Christian vision articulates the radical transformation that happens when we enter into this divine dialogue. Collins argues that this dialogical, communicative structure is a distinctive aspect of Ratzinger's thought and a unique contribution to the renewal of theology in our day.

Fr. Christopher Collins entered the Society of Jesus in 1995. As a Jesuit, he obtained an MA in history from St. Louis University, taught high school in Milwaukee, Wisconsin, and obtained an MDiv and an STL from the Weston Jesuit School of Theology in Cambridge, Massachusetts. After being ordained in 2006, he served as a pastor on the Pine Ridge Indian Reservation in South Dakota before returning to Boston College to begin a doctorate in systematic theology. He is currently an assistant professor of theology at St. Louis University and is also the chair of the board of the Apostleship of Prayer in the United States.

Eloquently and peaceably, with a rare combination of scholarly and spiritual discipline, Christopher Collins guides us into the very marrow of Joseph Ratzinger's theology: God calls us to encounter Jesus Christ through his Holy Spirit. In this simple insight, Ratzinger's whole theology and life are enfolded. Indeed, like an icon, this book draws us into the encounter to which Ratzinger bears witness. A stunning achievement.
Matthew Levering, University of Dayton

Fr. Christopher Collins has written a book which is both informative for the general reader and a useful bibliographical source for the student. There is a certain `freshness' in the tone and a pleasing humility in the presentation. This book is certainly a significant addition to the commentaries on Joseph Ratzinger's work.
Gill Goulding, CJ, University of Toronto

Collin's foray into the theological world of Joseph Ratzinger/Benedict XVI is highly recommended, both for beginning students and institutions with collections dedicated to Papal history and theology.
Robert P. Russo, Catholic Library World

Christopher Collins praises Benedict for the `simultaneous simplicity and profundity of his words.' That same simultaneity is beautifully preserved in Collins' own interpretation, which will serve as an excellent guide to both the letter and the spirit of Benedict's theology.
Khaled Anatolios, Boston College School of Theology and Ministry

Fr. Christopher Collins, with theological acumen and pastoral sensitivity, provides a robustly Christ-centered reading of the writings of Joseph Ratzinger/Pope Benedict XVI. This is an admirable introduction to the universal scope of the Pope's theological vision.
Robert Imbelli, Boston College